As a climax to anarchitecture week, we needed to go out with a bang and a roar. Plans were hatched for a Pirate Party to end all others. Moving on from our old island in the docks of East London, we decided that it was time for our galleons to set sail for greater riches. We realised that the best islands to be found in big cities are not in the sea, but surrounded by traffic (steel sharks).

A location was spotted by our agent in the crows nest and a call was sent out to the most scurvey ridden pirates in the land. "Land Ahoy" we hollered and our mob decended upon a pirate island at the bottom of Park Lane (London's most exclusive road, Hilton hotels and Lamboughini garages). 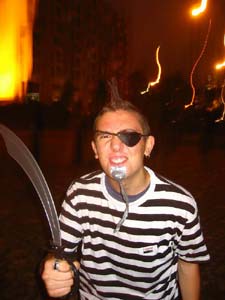 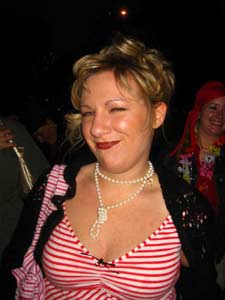 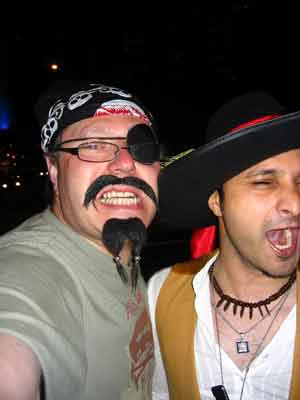 At least 10 score pirates had answered our call, bringing with them beat boxes and ghetto blasters to form our sound system. Pirates travel light and deadly, so to avoid the hassle of giant sound rigs, the Rupture sound system was much more stealthy. 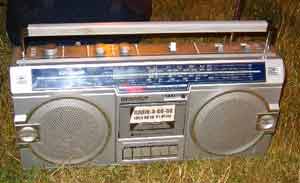 A Pirate radio station was set up on our traffic island, broadcasting out to our pirate hoards. Then the multitude of speakers picked up the broadcast and spread the noise loudly across the island! Harrr! 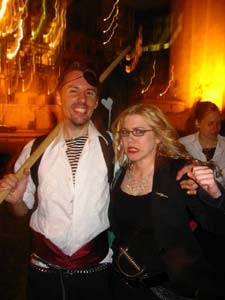 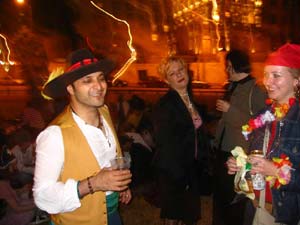 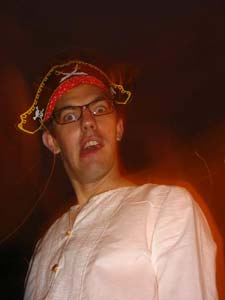 Pirates continued to dodge the steel sharks and make it onto our island and before we knew it a carnival of merry sailors had laid claim to this new land. 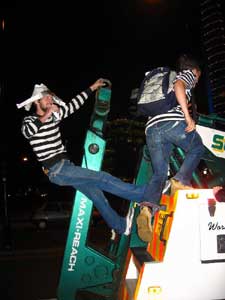 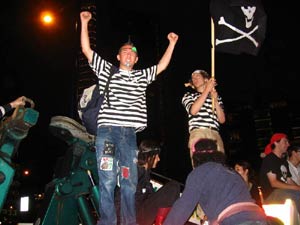 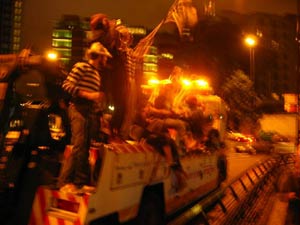 A merchant vessel pulled up to our shores, and a band of pirates made light work of boarding and plundering the poorly armed ship. 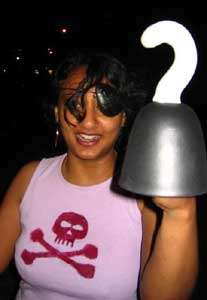 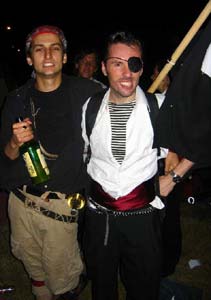 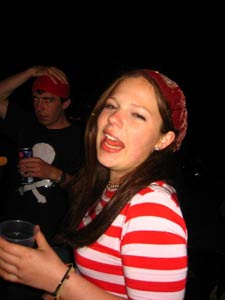 Rum flowed like a river and our pirates danced a jig to the pirate songs. Before long pirate law was declared upon the island and a lesbian pirate wedding was held. 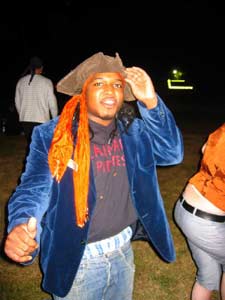 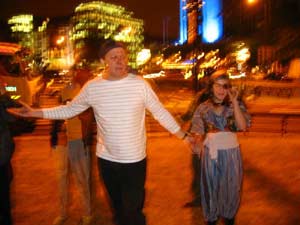 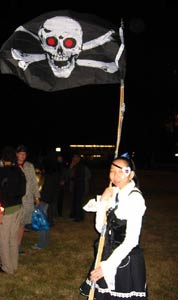 Another ship docked at our port, this time with darkened windows. Unfortunately she was hit by a passing vessel and it was discovered that she was a scout for Her Magesties Navy! Various Pirates attempted to board the vessels. Unfortunately Pirate Litost was injured in the line of duty and sent off in a rescue ship with a pirate wench. 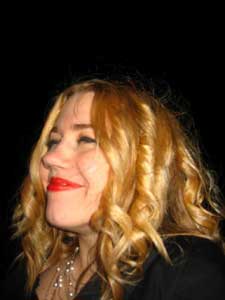 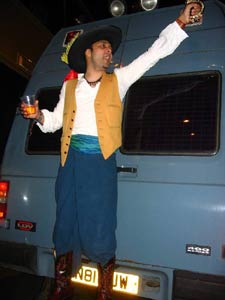 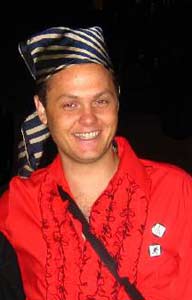 In memory of our fallen comrade the sound was turned up an a toast was made to his valliant efforts in battling our foes. The toast unfortunately drank us dry and as the island had no supplies it was time to set sail again. Deep into the morning our ships ventured out in search of rum and merriment. Pirate Mus lead us through treacherous lands, with agents of Her Magesty around every corner. We charged into central london for a night in town. Memories begin to fade of our journey, although at one point there was a very near Pirates Vs The Nazi's battle, they backed down after seeing our cutlasses glimmering in the moonlight. 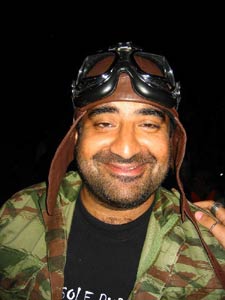 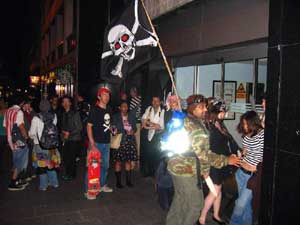 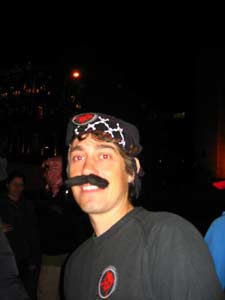 Three cheers for our Pirates, another for our fallen comrade, and a boo to Her Magesties soldiers and the fascists on the streets.

The party already started for me during the day with meeting Agents Dan and Litost to do some clothes shopping. Surprisingly enough for Agent Dan, the so called "Army and Navy shop" Agent Litost was talking about was in fact the "Salvation Army". Not finding anything piratish, they had back to Agents Dan place, while I tried to get some batteries for the Ghetto Blaster. But my japanese wondergadget swallows 8 big ones which were 15 quid. so no Ghetto Blaster from me, 15 quid are better invested in booze. Brrrandy for everyone!
Joining Agent Dr Cheese at his local, having an accelerator called Tequila and a pint, we were ready to shoot off to the Island. The Ladies in the tube were friendly to me, probably smiling at the first pirate they have seen that day... The eyepatch, bandana and beard started to work wonders. Yarrr!

After a slight diversion (= more girls to smile at) due to engineering works we arrived at Hyde Park Corner station. We encountered the first adventure: Her Majesty's force (Coppers)! The natural "enemy" of every serious Pirate! But no danger, they must have thought we go to a fancy dress party. Haaa how wrong they were. At the meeting point, more excited and enticed Pirrrates.
Walking to the Island, crossing the dangerous water poisoned with metal sharks with wheels where their fins are supposed to be (but luckily enough for us without frickin' lasers on their head), Agents Shazz, Aneeta, Mus, Gemma and I took the opportunity to build the flag pole and set the Pirate flag! The Island was eventually ours!! More Brandy for everybody!!!

The Rupture Sound System was in full effect, music charmed the Pirate's ears, the booze was flowing. Pirates were happy. The party entered another climax: The Lesbian Pirate Wedding with a proper "Yarr yarrrrr yarr yarrrr, yarr yarrrrrr yarr yarrrr" as the wedding song. Agent Robin as the father of the bride looked smarrrrrt. Agent Mus holding up the flag and Agent Arthur doing something I really can't remember. Bloody Brandy!

Somehow suddenly a tow truck for busses appeared. An unknown antagonistic vessel on our shores!! Gigantic. Powerful. Fierceful. The responsible pirate in the crow's nest should have walked the plank immediately, for not spotting it in time! We entered the vessel and flied our flag singing drinking songs. Its captain had no chance of resistance.

Later on a Galley (tour bus) crashed into a smaller fiendishly blue coloured Vessel (van). Nobody got hurt at that time). None of the ships have sprung a leak though. Apparently the vessel was an undercover ship of Her Majesty's troops which had nothing to oppose to the much bigger galley. Galley against small Vessel: Galley wins. Handy for Her Majesty's troops that they could fill out the necessary forms themselves on the spot. Only waiting for an official soldier to sign it off. The galley was a proper tour galley with darkened windows. Agent Litost came to me and spread the rumour that Coldplay might be in it after receiving a txt msg saying Coldplay had a Galley accident. Could this be our chance to hear some pirate songs in a proper fashion? Our attempt to enter the galley didn't work out. And then the incident happened: Agent Litost, brave but with a Brandy mellowed mind, climbed on the shoulders of two other pirates, knocked on the window, without getting an answer, he slipped and fell on the ground. Water can be hard as tarmack. Unfortunately Agent Litost showed it by example. I must admit, I was scared as shit as I was right next to the accident. He didn't move, no noise. We called the ambulance. A pirate MD was amongst us. First aid was here. Help was close. Agent Greenman and Agent Lucy arrived not knowing about it with loud YAAARRRRRRRR only to be welcomed with a collective SSHHHHHHHHHHHH! Well. Agents Dan and Claire drove to the Hospital. We haven't found out what band it was..

The party continued for some time. Until we decided to get down the flag, move towards Tottenham Court Road, where the Pirates wanted to find a gin palace still open. I took a short cut, boarded a night galley to my local haven....

I was able to allure some German pirates to the unknown shores. They enjoyed their stay. Sang. Partied. Fell in love with the Space Hijackers.

To cut a verrrrry long story short: It was very good. And eclectic. And Yarrrrr.