Now before we even start, we would like to point out that the reason for putting all of this on our site is not to try and score points in some art/activist pop chart. Nor is it to slate other people and start some sort of gossip war of words with other groups. We had simply done a small project to poke fun at the 'coolness' of the Burner Prize, the next thing we know someone discovered a link with Puma and then all manner of emails and insults are flying around.

We have been fans of Banksy's work for ages, and as another group of political artists we have been very interested to see what he is up to of late. It is important for people working in political art to check out what each other are up to and keep a conversation going so that we are all kept on our toes. When Banksy launched a number of small books of his work, we thought what a great way of spreading your ideas and not selling out, we even went and bought a copy or two.

We all have to pay the bills, however how you decide to do that, particularly when you are known for your political stance, is something which your reputation rides on. It is for this reason that we were interested in the following story ...

It seems the lure of corporate sponsored cool can lure even those we thought immune! Everyone's favourite UK Bristol born political stencil artist BANKSY and his friends at Pictures On Walls have linked up with Multinational clothing and trainer company PUMA.

Puma sponsored the latest Pictures on walls exhibition Santa’s Ghetto, just around the corner from their trendy concept store on Carnaby Street which included a special Banksy window display.

With an exhibition of very expensive limited edition prints, celebrity endorsement , bouncers searching people to ensure no graffiti took place, and general sleazy graphic designer trendies in attendance. Banksy and pals organised 'The Burner Prize' a prize for London’s best taggers (apparently most of whom had no idea they were in the prize) and then awarded a cheque to someone’s granny?

"A Culture where property is more important than people is a fucked culture" Burner Prize website. Hmmmm?

On sale in the shop/gallery were a number of Banksy t-shirts with Puma logo’s on the sleeve, or where they Puma T-shirts with Banksy prints on the front? Apparently similar Puma/Banksy t-shirts have been on sale at his previous shows.

I went to Banksy's Turf War exhibition last weekend. Very nice indeed. I liked the big wall pieces and the animals. I was a bit surprised at the amount of corporate sponsorship that he had though - my T-shirt had 'Puma' on the sleeve, which really sucks. Still, it's cool if it enables him to put on a good show, which he did. Someone actually scrawled 'Banksy is a sell-out' on the front window pane. shtikman.com 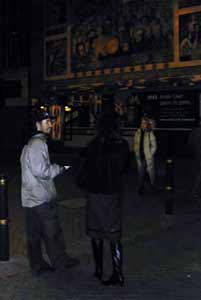 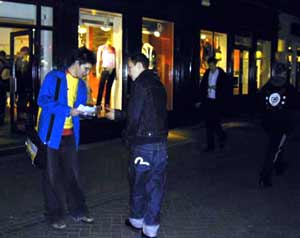 In order to remind them to practice a little of what they preach a couple of Space Hijacker agents went down to the show and handed out spoof 'limited edition Banksy prints / discount vouchers'. Readily snapped up by the culture vultures in attendance it was our way of letting the organisers know that we were onto them.
We have no problem with them selling their work, just don't tell us you are anti-consumerist when you are in bed with a multinational, selling expensive exclusive products, promoting you signature clothing range and 'bling blinging' with B list celebs.

Since this action we then discovered pictures of a Banksy / Puma shoe on the internet with several sites offering to have them in stock for sale as soon as they were released. At first we were outraged, and after receiving the following response from the Banksy website more than a little confused.

"Puma do not sponsor Banksy. Puma sponsor the promoter POW who have organised two Banksy shows in the last year. To my knowledge Banksy has never made any Puma product and would not wish to."

It has since turned out that the shoes were never meant for the public, instead made by Puma without Banksy’s knowledge as presents to the Pictures On Walls staff. We had originally (before we knew they were not for the public to see) posted up a story about the shoes being released and how dubious we thought this was, this got people into trouble and we are sorry for having got our facts wrong.

We wonder if the t-shirts were also without his consent?

Whatever the relationship between Pictures On Walls, Banksy and Puma is, it is doing no credit for Banksy’s political edge. The irony of a group of artists pushing an anti-corporate stance and then hooking up with a multi-national and selling exclusive, expensive designer goods is hilarious.

As Agent Litost Puts it:

I've been involved in this campaign from the start. My suspicions about a possible connection between BANKSY and Puma began when I spotted artwork by BANKSY and adverts for the Burner Prize, in the window of the new Puma concept store in Carnaby Street. I took pictures then sent an email to Puma to ask them about their connection with Banksy. They responded by saying they knew nothing about the window display and advised me to contact the store directly. Incidentally the email address I used to send the first email was advertised on the Puma concept store website. I then decided to email the Banksy website, politely asking if there was a connection between Banksy and Puma. By the time I had received a reply the existence of the Banksy Puma shoe had been revealed. The people at the Banksy website also denied all knowledge of a connection with Puma. Lets get a few things straight.

1. The idea behind posting up text and pics with regard to this issue was to inform people of the existence of the Puma / Banksy connections, not to stop people buying Banksy or Puma products.

2. With regard to Puma and their factories, the issue of whether or not they use sweatshops is not the topic being questioned. Besides if Puma are such a great company why is their such an issue with Banksy and Puma working together surely it's a good thing.

3. The point being addressed is the co-optation of the anti-corporate movement. Much of BANKSY'S work is related to this movement and it's politics therefore being linked to Puma in some peoples minds is a bad thing for Banksy as it undermines his work. However Banksy has already began to undermine his work by selling original prints for around £25,000 a go. Oh and lets not forget the MTV thing!

4. If supporters of Banksy or PUMA wish to take offence to the things said on this and the Space Hijackers board then let them, what we say or do is not going to affect the integrity of Banksy or Puma or their sales. What they should do is stop bothering us and let us have our opinion. Why don't they just disappear of to the nearest 'independent' gallery purchase a piece of Banksy co-opted anti-corporate artwork and then run down to Puma and rock their latest designer trainers. If they get bored they should locate their nearest Starbucks grab a latte and discuss with their friends where they should hang their new Banksy artwork in their studio flat in Shoreditch at the same time as discussing how cool the first issue of SLEAZE magazine is.

5. We all need to make money to pay the bills and keep a roof over our heads this is true. The machinery of the corporate world is inescapable. But please don't use our culture to attain cool in relation to a product that does not seek to support anti-corporate awareness. In short co-opted corporate cool is killing our culture. Don't buy it.