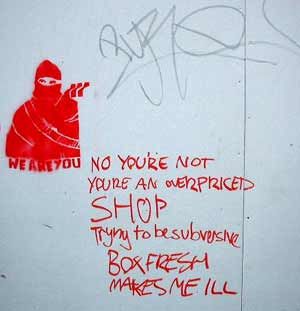 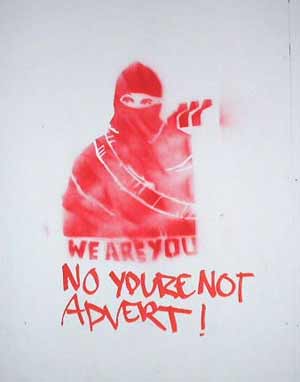 You may have seen some of the Zapatista graffiti around Central London recently, what you may not have realised is that it was sprayed up not by some urban activist, but rather by a trendy overpriced clothes shop based in covent garden.
BOXFRESH obviously decided that this whole zapatista thing was getting rather trendy, and that there was money to be made. So in an attempt to jump on the bandwaggon, they came up with this new advertising campaign, hoping to use the zapatistas to flog a few more t-shirts.

"We Are You" their catch phrase and a boxfresh logo was slapped on top of pictures of zapatistas and quotes by Sub Commander Marcos himself. In a blatant attempt to fuse the boxfresh logo with the zapatista struggle. It seems that the Marcos quote about the zapatista balaclavas meaning that they could be anyone, matched rather too well with boxfresh's own catch phrase.

Worse still in the shop itself Boxfresh are selling "Zapatista Kits" at £30 each, showing how you too can become a zapatista by giving boxfresh some cash (none of which it seems goes to help the zapatistas).

Below is a copy of a letter we wrote to boxfresh, please continue to pester them and harrass them untill they pull the offensive advert.

I have tried to call but keep getting your answerphone, therefore I have decided to write. The reason that I am contacting you is to express my utter disgust at your current advertising campaign. The Zapatista pictures, text and the Zapatista Kit.

I would like to know how you can justify turning a struggle a serious as the zapatista's into a marketing campaign for your expensive covent garden clothes shop? How can you claim that by putting up zapatista images and text, all covered in Box Fresh logo's and catch phrases, that you are doing anything other than attempting to jump on the bandwaggon of a struggle that has captured the imagination of many people?

Please do not try and say that you are attempting to futher the cause of the zapatista's, as if this were the case then there would be no need for you to slap your logo over everything. The fact is that you think that the undergroung struggle of the zapatista's will make you cool. That you are attempting to link your brand to the zapatista's, in order to sell more clothes and make more money. You obviously have no respect for the people who have been raped and murdered in the zapatista struggle, else you would not be attempting to turn their cause into something to sell a few more t-shirts. The ideals of these people and their leader Sub Commander Marcos, obviously mean nothing to you, they are simply something that is a bit trendy at the moment. You quote Marcos on your shop windows and on the graffiti that you have sprayed up (all with the box fresh logo), not because of some respect for his words, but beacuse they sound a bit like your "We Are You" adverts. Have you ever heard of the phrase "People before profit", probably not.

I think the most offensive item has to be your Zapatista Kit retailing at £30. The idea that only by parting with their hard earned cash, and wearing a Box Fresh zapatista t-shirt, getting an official Box Fresh zapatista can of spray paint and listening to a Box Fresh CD, can people become a zapatista is disgusting. Have you ever taken a moment to think that perhaps somethings in life can't be bought off the shelf? And while I'm on the point, exactly how much of that £30 is going to help the zapatistas? Because no one in your shop seems to know, there are no signs saying how much, and even your head office secretary had no idea. Could that possibly be because not a penny of it is? That you really couldn't give a monkeys as to these people, however their blood shed can make you a quick profit.

Finally I just want to let you know that I am going to post this letter up at a number of activist and zapatista websites, with your email and your address attached. I am sure that a good number of "evil anti capitalist anarchists" ,as the press keeps branding everyone, would love to know about your dirty campaign.

Thank you very much for reading (I have attached a picture I took of one of your adverts, it seems I am not the only one who finds you offensive). Please write back soon, 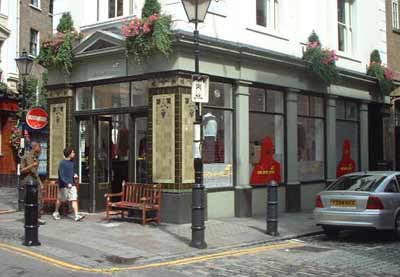