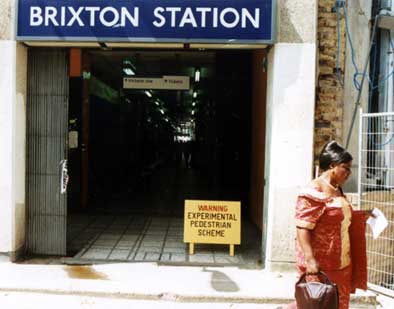 We had been Wanting to have a go at this for ages and an invite from MSDM to get involved in their project down at Brixton gave us the perfect excuse.

RKDK was a project set up by MSDM to take place in Brixton's Electric Arcade, this row of shops by the tube station was due to be demolished as part of a general regeneration of the area. MSDM had gained permission to place work in the display cabinets along the arcade and hold a series of live events before it was finally demolished. All of the participants had talked via email for several weeks in the run up to the project, and the events took place over several weeks.

Unfortunately as the various events took place London Underground became more agitated,and eventually calling the police and banned everyone from the arcade. This all happened the week before our project, and we were told that we were on our own if we wanted to go ahead. However we have never asked LU for permission in the past so why should this make any difference now, we all bundled into the van and headed on down to Brixton regardless.

The project culminated in a night at the nearby Trade Apparment Gallery, where work was presented and a talk was given by Gustav Metzger.

We decided to take our cue from the developers, who were not entirely in favour within the community, and proposed to create an overly oppressive and condescending experimental pedestrian scheme. Our idea was to make it look as similar as possible to an official scheme and try to provoke a reaction from the people using the arcade.

We hoped to make people more aware of the control that they are put under within public space especially the transport system adjacent to the arcade. 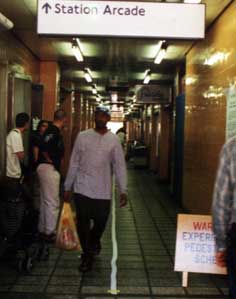 Our Scheme consisted of a set of signs at either end of the arcade, with a white line running the length of it. Posters were put up on behalf of the developers asking people to stay in lane. As a final touch we taped off all dangerous areas in yellow and black Hazard tape. Dangerous areas included most of the arcade, with rubbish, corners, shop displays, windows and even people all being taped off. All of this was installed whilst we were wearing special SH yellow workmans outfits.

Unfortunately once they had realised neither London Underground or the Developers saw the funny side of our scheme and swooped down to remove it. Damn.

The evening at the Trade Appartment was a chance for all of the contributers to get together and talk, without the aid of the www. The Syndicate amongst others proved to be a good bunch. Documentation of a lot of the projects was put up including our "Causing Trouble in London Underground" guide leaflet.