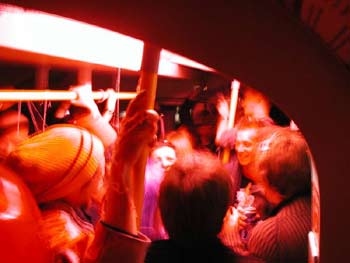 Four years in the waiting since the last one we organised, this Circle Line Party had a lot to live up to, and it certainly did that.

The plan for the party was to create an expression of freedom, a protest against the oppressive, repressive, war mongering policies of greedy white men that want to rule the world. An attempt to promote DIY culture in an age of rampant consumerism. A space for interaction between people, away from the clutches of Capitalism, and two fingers up at the constant clampdown on civil liberties and un-commodified fun.

A planning group was set up a couple of weeks before the party and the circlelineparty.org.uk website was launched. This gave the low down on what the party was about and tips on helping us to stay out of trouble, survive a lap and maximise the fun.

A circlular theme was decided upon with entertainment being provided by DJ Ricky Styles, Cast Off knitting circle & Rythms Of Resistance Samba Band. As with the previous party there was a requirement to smuggle all of the passengers and equipment onto the train and under the noses of London Underground. This meant that the sound system, tequila bar, sweeties and pole dancing poduim all had to be disguised as luggage.

In order to stay undercover whilst underground the plan was to only have the party whilst we were in the tunnels. As soon as we hit the station everyone was silent (well at least until they had drunk a bit too much). People were asked to bring quick change outfits, so that they could transform from business like commuters into party animals and back again at a moments notice. As soon as we entered a tunnel, the band would start up, the DJ slip on a tune and the party people dance like no tommorrow. As soon as we hit a station everything stopped and we all tried our best to look like bored commuters.