Our first being held in 1999, the Space Hijackers have since organised several parties on London’s Public transport. The idea behind them is to corrupt the space of the Underground system, and open it up to new meanings, possibilities and potential.

The Underground is the place of our daily commute, we walk on the left, we go where we are told, we wait in standby until we are delivered to our jobs trying not to make it obvious that we are reading other peoples papers. Old ladies are forced to stand as bored and tired office workers pretend to not notice as they read the Metro, dishing out it’s opinions for free to millions.

The plan for the parties was to create an expression of freedom, to turn the drudgery of the tube upside down. To create a space for interaction between people, Drinks are given out, friendships made with strangers and a crack in the caked on make-up of Capitalism appears. An attempt to promote DIY culture in an age of rampant consumerism, and two fingers up at the constant clampdown on civil liberties and un-commodified fun.

The parties are not a group of protesters going down onto the tube and making life hell for the general public whilst raving the night away. The general public are treated with the utmost respect; we are the general public ourselves. Timed to occur once everyone has headed home from work, the parties hit the tube once the only people left are those who have stayed back for a drink after work, and those who are on their way out for the night. We find general commuters staying on for extra laps, drinking with us, even pole dancing with us! 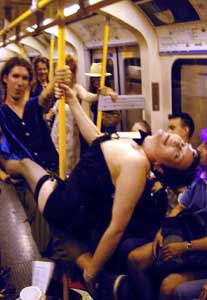 The point of the parties is not for one group to provide entertainment whilst the masses passively consume it, If you hoped it was going to be there, you were told to bring it along.

An invite was sent out along with a set of rules on how to play the Circle Line Party game, along with some handy tips, Click Here