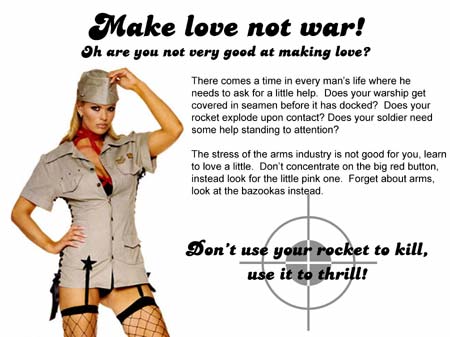 Every two years, London's ExCeL centre plays host to "THE WORLDS LARGEST ARMS FAIR". Organised by our peace loving government, arms dealers (often without licence to sell arms) are invited from across the world (regardless of their human rights records) to sell bombs, guns, tanks and anything else which might harm people to bidders from across the world (again regardless of their human rights standards).

This can leave the Government in an awkward position, especially as these dealers use the opportunity to sell illegal weapons under the counter to corrupt regimes. The police even tried to raid the fair last time around to arrest around 60% of the dealers who were not licenced to conduct business, however the Government quickly put a stop to that and told them to concentrate on the protestors outside, even to the extent of using anti-terror laws to corral people who were trying to stop the fair! 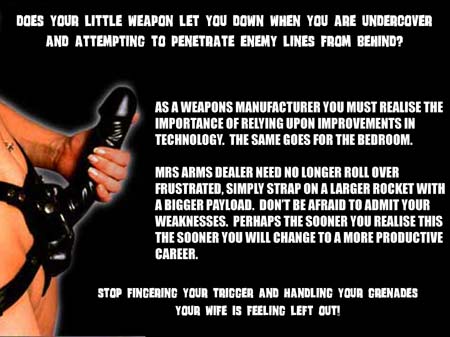 Taking one look at the arms industry you will find a lot of middle aged men, surrounding themselves with large phallic objects and imagery, rockets, bombs, cannons, submarines etc. It seems the men who conduct the business of death, must rather be compensating for a "lack of weapons capability" elsewhere.

We took it upon ourselves to offer some advice to these repressed souls and perhaps get them to focus their tension in more productive ways. For want of a better phrase, to learn to love their biological weapons. There are plenty of products on the market today which can help them satisfy their frustrated partners, and release some of the tension which has built up inside them. Perhaps these lonely souls simply had a bit of a uniform fetish and were too embarrassed to admit to it?

We realised at the last arms fair, that it is possible to speak to the delegates on the DLR trains heading into the fair. This time around we thought we could offer some advice and show off a few products at the same time. The idea was born, a sex toy party for arms dealers on the trains!

Now all we needed were some sex toys and leaflets!