The Olympics is coming to London in 2012, and with the finale of the 2008 Olympics in Beijing a ceremony was called to note the official handover of the games. Hackney Council (where the games will be held in London) organised a street festival to celebrate the fact, 1948 was the theme of the event (that being the last date the Olympics were held in London) and all were asked to join in the joyous celebrations.

However for some residents of East London, Hackney Especially the games are not something to be looked forward to at all. With land being compulsory purchased, people and businesses being turfed out, and the wholesale demolition of public spaces and local character many people are not looking forward to the games at all. We certainly see it as just another way of funding the spurious 'regeneration' of East London, where we see local residents being moved out, and a plague of luxury flats and 'loft living' apartments springing up for city workers to use as second homes, or investors to purchase as 'buy to let' money making schemes. It seems the only people benefiting from this influx of money (as always) are the property developers, estate agents and investors.

It was with this in mind that we decided to gatecrash the event, and mark the official handover of the Olympic protests from the Free Tibet Campaign to the Free Hackney Campaign. Of course if you are going to gate crash anything, what better way to do it than in a great big bloody tank 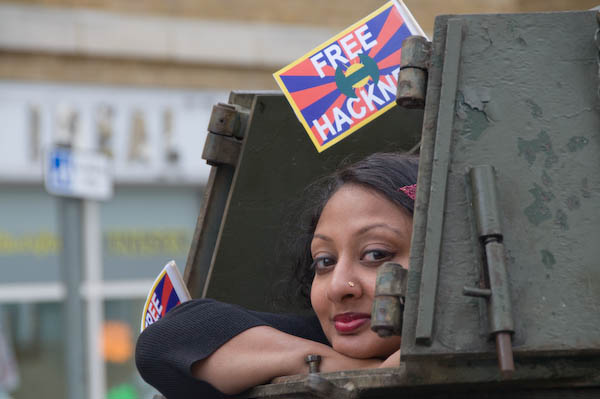 Fredom, our DSEi busting armoured personnel carrier had been out of action since September, however after having recently passed a police inspection it was time to get her back on the road. The launch of the Free Hackney Campaign seemed like a perfect opportunity.

So it was with great expectation and not a little hesitation that we all met up in the secret Hackney Wick (home of the Olympics) lock up that we were storing our tank in. We fired up the engine and all seemed well, Fredom started first time and the Hijacker crew jumped onboard as we warmed up the engine. Fredom seats 11 inside her inch thick armour plating, and it's a good job too, as driving her is not quite like driving any other vehicle on the road. Vision is slightly limited given that there are no windows, only armoured hatches which can be flipped open. However as in all good anarchist adventures, team work and collaboration is the key. Right behind the driver sits the gunner, who's chair winches up into the turret at the top, and to the side of the driver is the commander who is in charge of navigation etc. We have people keeping an eye out of the back and a couple of runners to jog alongside just incase. what could go wrong? 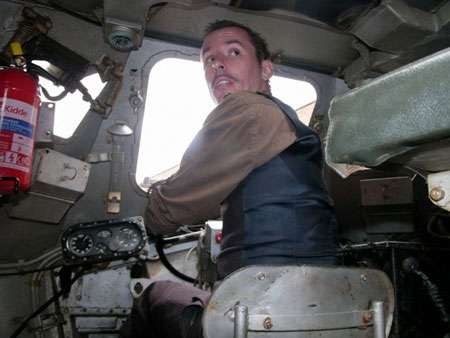 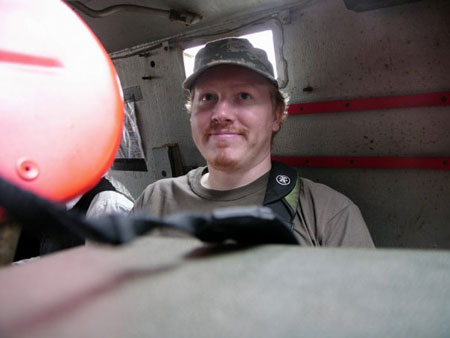 We crunched Fredom into gear and gunned the motor and we were off. Neighbours windows opened as the almighty noise of our vehicle started and we pulled onto the main road. All was going well, pulling a right hand turn our 8.5 tonne monster lurched into action and we changed up into 3rd gear. Olympic handover here we come.
This unfortunately was where things started to go a little amiss. We were approaching top speed of about 15-mph when the power began to fail, Our accelerator even pushed to the floor was having little effect, and we were struggling to make it up the incline we were on. Dropping down a gear to gun the motor seemed like the solution, however it was to no avail. Before long the engine cut out on us and with a grunt from the engine, we cut out and were at standstill. 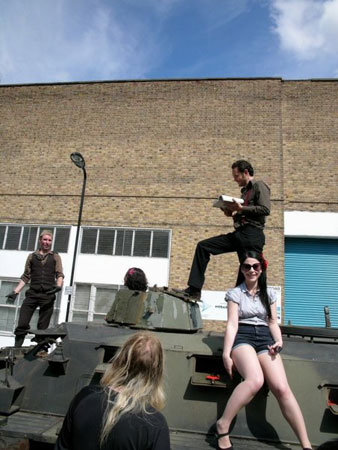 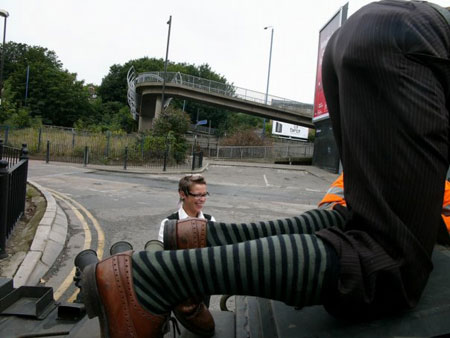 Still, dressed in our outfits, the team sprang into action, the armour plated bonnet was flipped open and we got to work on inspecting the engine. A quick trip to Halfords on bicycles from some of the team and with new parts and top up of the hydraulic oil we were back on track.

We once again lurched into action and began our long long drive to the celebrations. Trundling through the winding streets of East London in a 50 year old APC is not the simplest, or most discreet way of travelling. En Route the engine noise alone set several car alarms. The first caused panic in the tank as we thought we had hit the car. By the third we found the whole thing quite amusing.

Our out runners would occasionally hop out at major junctions to stop traffic and allow us to pass across, as our 15-mph speed limit makes zipping through London's traffic lights some what of a challenge. Also it was only now that we realised the importance of things like weight limits on bridges, with our crew being forced to hold their breath as they trundled across some pretty slim margins of error. 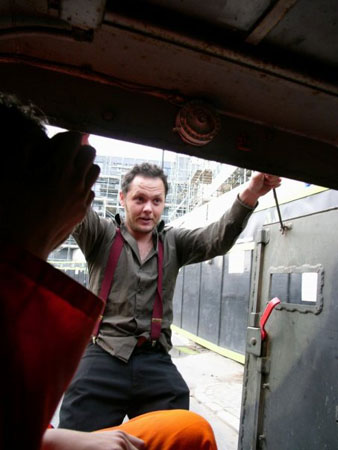 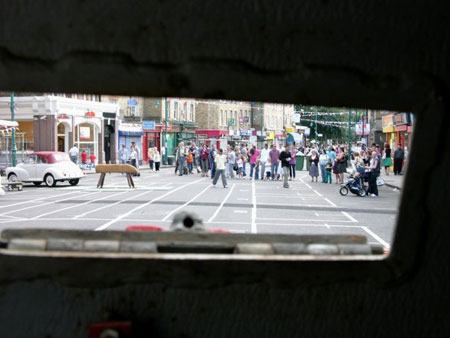 After several more mechanics pit stops and having picked up quite an entourage of cyclists, new passengers and followers we finally had the street party in our sights. The tank trundled towards the end of the road at about 5-mph, and as if playing their part in an episode of casualty a young child decided to let go of it's mothers hand and run into the road in front of the tank. Slam, went the brakes and the tank came to a jolting halt. Mum, quickly ushered the young boy out of the way and off home for a stern telling off. In the tank we drove on forwards to the entrance of the celebrations. And kept driving and kept driving. Hmmm, no brakes.

It seems our emergency stop had burst one of our rear hydraulic cables and aside from spraying oil everywhere, our brake pedal was doing very little. The MC from the event had noticed the tank approaching from his right and started to call out on the tannoy as part of his coverage of the event.

"and coming into the fair now we seem to have a tank!" trundle trundle "It's driving straight towards the security cars!" trundle trundle, (at this point agent Greenman attempts to halt the tank with his bare hands pushing on the bonnet. "I don't think it's stopping" trundle "here we go" crunch! 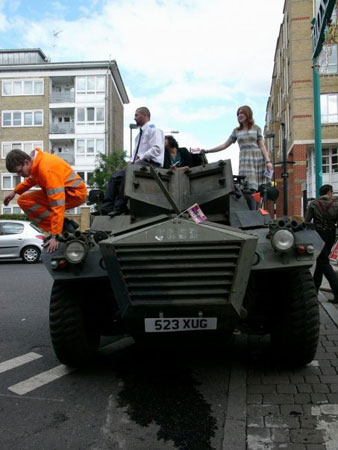 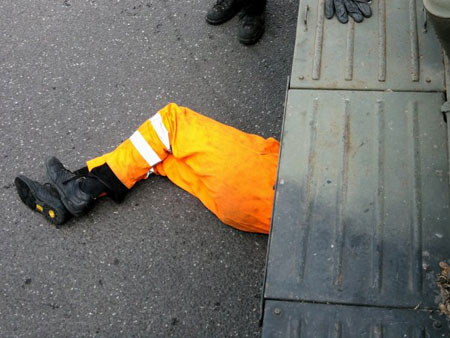 As the security teams van got squished into the road under our wheel the tank finally came to a halt, and out popped our banner waving, free hackney chanting agents. After our dramatic entrance into Hoxton Street, we decided it would be best to split into two teams - a team to fix the tank and a team to get on with launching the Free Hackney campaign. The Free Hackney team got busy with attaching our banners and bunting to the side of Fredom, giving out flags to small children and leaflets to many of the slightly confused passers-by, as our arrival had, as you might expect, made a bit of a stir. 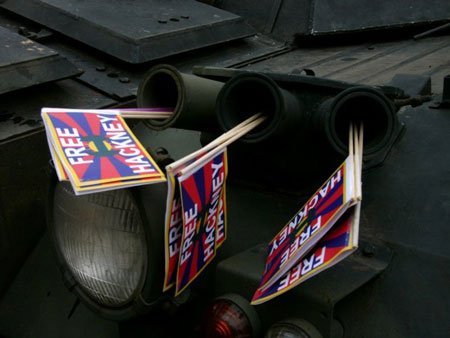 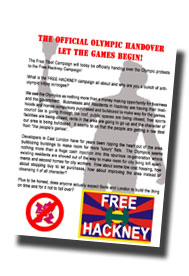 The aim of going to this event (other than to take the tank for a spin) was to be a significant, very visible anti-Olympic presence in the middle of the celebration - to point out that really there isn't much reason to celebrate. The Free Hackney campaign is taking over from the Free Tibet campaign (with, needless to say, a healthy amount of irony) and aims to free the London Borough of Hackney from the inevitable destructive consequences of Olympic 'regeneration'. Homes and business premises are being compulsory purchased and demolished, destroying people's lives, livelihoods and the character of the area to make way for a shiny homogenous vision of 'London 2012', which will only last a few weeks. And then what? The 'People's Games' are only the people's in that we are paying for them. 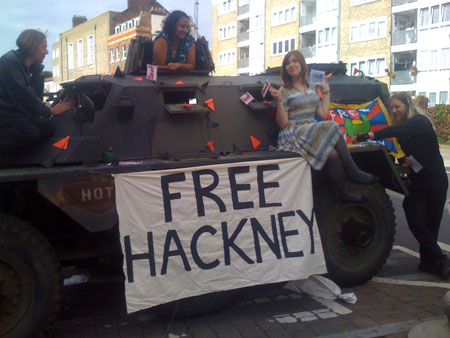 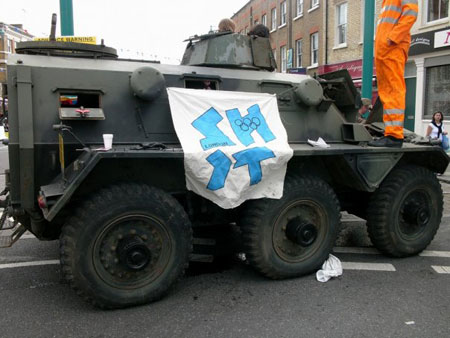 As we had dressed for the occasion, in our 1948 outfits we were not only sharply dressed and subverting in style, but blending in well enough not to overly concern the Police, who wandered by for most of the day giving us little more than a vaguely puzzled glance. When they finally came over, towards the end of the day, they were mostly concerned about whether the tank was insured and whether it would be capable of moving by the time the street party was scheduled to end, as otherwise it would be blocking half the street. In general they seemed to be very tolerant, if not exactly supportive of our campaign. In fact, when one agent was explaining our concerns about the impact of Olympic regeneration to a young boy, a policeman standing nearby was seen to nod and say something which sounded suspiciously like "Yeah, good point".

We were extremely pleased that almost everyone we spoke to agreed with us to some extent. Many people said that they were glad that there were protesters at the event, drawing some attention away from the whole nationalistic self-congratulatory celebration and showing that many residents of the host boroughs are not at all happy about the Games coming to London. 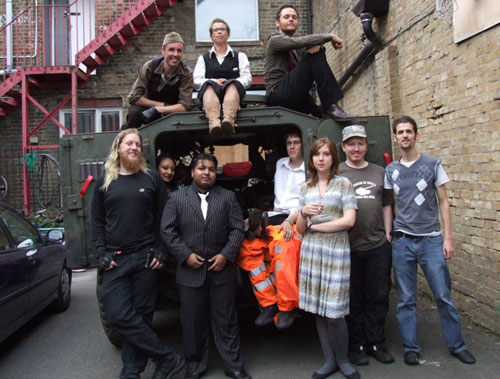