EVERYTHING INSTORE HALF PRICE TODAY
24/11/07 - Buy Nothing Day

Buy Nothing Day is an annual protest against the consumer culture which grips many of our lives, a chance to take a step back and look at what's important in life, and whether shopping and advertising help or hinder society's well being. We feel that there are more important things to life than chasing empty promises of a better life through the collection of capital consumer goods. So each year on BND we enter into the chaos of the pre-christmas shopping blitz to play within the cathedrals of consumption and spread a healthy piece of chaos amongst the ringing of the cash tills.

The 80's are back in fashion and slogan t-shirts are back on the high streets."FRANKIE SAYS RELAX", "MAKE LOVE NOT WAR", "BAN THE BOMB", fashion stores are knocking out soulless counter-culture slogans like there's no tomorrow, and rebellious teens have ditched their che guevara t-shirts for the latest sweat shop produced slogans.

We thought it might be time to take our own slogan t-shirts back out for a stroll around some of the capital's boutiques, chain stores and fashion houses. 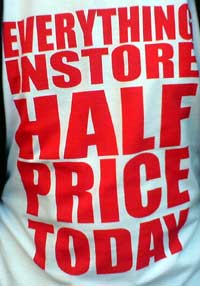 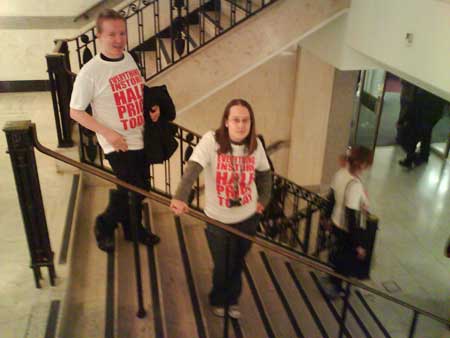 Around fifteen Space Hijacker agent met up in our London HQ, before setting out into town for a little window shopping. We had a very interesting tube journey, before arriving at our first stop, the most famous store in London, Harrods. Set in the exclusive west London area of Knightsbridge, Harrods prides itself on selling extortionately priced goods to the upper classes, and providing a glimpse of how the other half live to the many tourists who flock inside to gasp at the prices.

We slipped past the uniformed doormen/fashion police at the front door with our coats on, before diving into a lift and heading straight for the top floor. Once safely inside the lift, we slipped our coats off and were ready to see what Harrods had on sale.

The Space Hijackers by nature are a very polite and friendly bunch, and so as customers approached us asking for directions etc, we were happy to point them in the right direction and offer assistance wherever we could. One helpful agent, realising that a staff desk had been left unattended decided to set up station there until the Harrods worker returned. 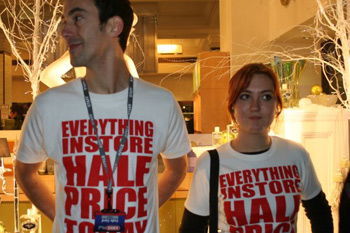 Unfortunately the security seemed to paint a very different picture of our assistance, "Stop talking to my customers" one called out as they attempted to round us all up. "You're trespassing" they called as we tidied the messy clothes and tried to help. Within minutes about half of our group had been corralled and were marched towards the doors. "Don't you realise, people think that your t-shirts are about this store?" , "Oh gosh, that never occurred to us, oops!"

Whilst this was going on several other agent managed to give the security the slip and wander off to see what was on other floors. By the time the first group had been ejected from the store, and promptly banned from coming back, a second team of security piled out of a van which screeched up at the front doors and dashed inside. Eventually our team left the store and regrouped by an animal rights protest at the doors. Incase you were not aware, Harrods is the ONLY UK department store which has not got a policy against selling real fur. 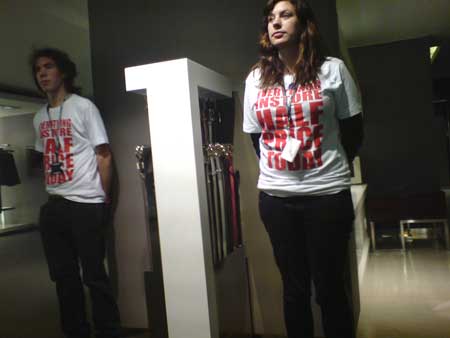 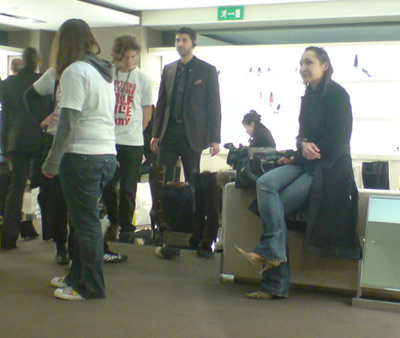 Once we had managed to cross the road past the variety of Ferraris and Mercedes which were triple parking outside in order to stock up on designer goods, we decided to pay a visit to some of the smaller boutiques in the area. First stop was Victoria Beckham's favourite Gucci. Strolling past the doorman our team quickly spread around the store to take it all in. Incidentally one of the most amusing things we found were handbags with a Gucci crest on them, in the centre of the crest was a knight in armour with shopping bags in each hand!

Obviously sensing our lack of platinum credit cards, the manager was quickly on the scene, informing us that unless we left the store, they would phone the police. Several agents tried persuading her that our t-shirts were the very latest Katherine Hamnett designs, but she seemed not to care. Perhaps it was an inbuilt horror at the thought of being seen in the same outfit as someone else which caused her to escort us from the shop. 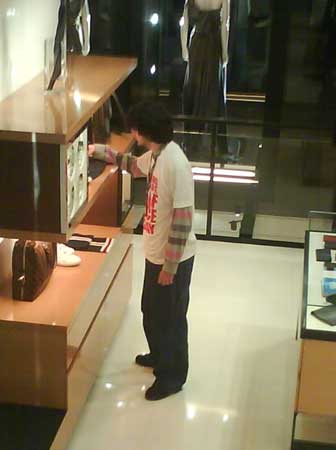 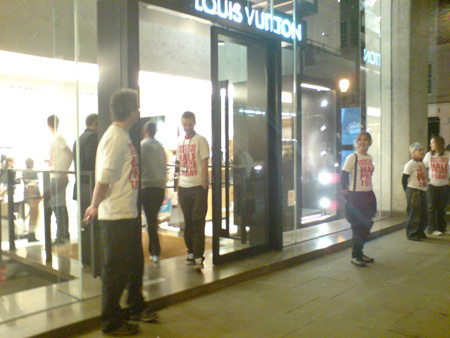 Louis Vuitton gets a helping hand or ten

Thankfully we were not far from our next stop, as the lights from Louis Vuitton beckoned us from across the road. Within seconds half our team had slipped inside to help out, whilst the other half stood by the door to say hello and welcome passers by. Curiously the security guard from Gucci dashed across the road with us, and as we entered let out a desperate sounding cry "Don't let them in, it's a prank!!!!"

Thankfully the Louis Vuitton staff, who we seemed to outnumber by some amount were in no mind to be taking orders from their opposition. The manager again however seemed to dislike our presence "Ok that's enough, everyone out now", "But we're just trying to help, what's the problem?, by the way do you have any bags that aren't brown?" "Out, out, out".

Time for a quick bit of refreshment we thought. Growing tired of the well-to-do accents and ridiculous price tags, we made a decision to head back to more common hijacker territory. Our old friend Nike Town, home of sweat shop shoes, corporate co-option of sub cultures and of course their attempts to brand London with their running events. 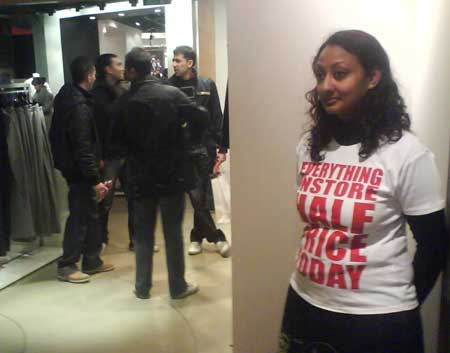 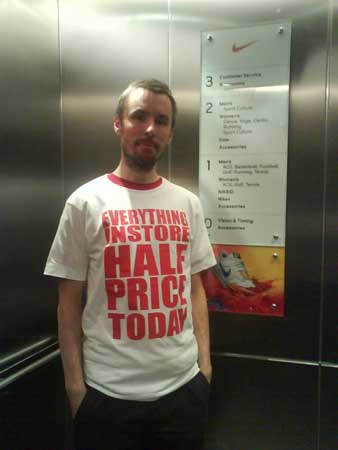 The team made it in pretty niftily, and slipped straight up the escalators to the top floor (we figured it would take them the longest amount of time to kick us out this way). Almost as soon as we had arrived however their aggressive security team were straight onto us.

"We haven't had protesters in here in a while, ok you know the drill, leave now before things have to get ugly"

Yes they were the very first words they came out with. Thankfully several of our team managed to avoid the barking dogs and slipped into the lifts. Agents PA and Bristly Pioneer, then spent a fair while traveling up and down as lift attendants directing customers about the store using the handy plan mounted to the wall. By the time they left, the rest of our team had been manhandled out of the store and were busy on the pavement chatting to potential customers

"Is everything instore really half price"
"that's what my t-shirt says madam"
"wow"
"I know, great isn't it?"

Next stop we decided was going to be just next door 'Europe's Largest Fashion Store' Top Shop. Things here took an even more interesting turn however. Our agents successfully maneuvered past the door security and into the store, splitting into two groups. One headed up to menswear, whilst the other headed down to the womenswear.

After a tip off from Nike Town, the security team began their chase and successfully rounded up all of our agents, barging past customers and shoving them out of the door. It is worth remembering at this point that all our agents were doing were wearing some t-shirts, not actually breaking any laws.

As they got to the last of our group, the bouncers, ahem, I mean security team, decided they had had enough. Agents Monty, PA and Bristly Pioneer were taken prisoner. A team of 3 security bundled them through the main shopping floor and past the tills to a special Top Shop Gaol.

Yes, just behind the tills on the ground floor is a special set of holding cells for top shop prisoners! After refusing to be split up or even enter the cells our agents ended up in a mexican stand off with the security.

Thankfully the rest of the agents had regrouped and realised we were missing. They then sent two of our agents in to speak to the manager of the store (we should probably point out these two were actually a lawyer and a criminal barrister). The manager seemed pretty shocked, and within a few minutes the security chief came back to the two thugs who were holding our agents.

"Right, the police have decided you're not worth it, so you can now go"
"Great, what was your name by the way?"
"Get out, you can't have my name"
"Well you'll have to give it to the judge"
"Out"

After that bit of excitement, we decided to call it quits for the day and head off for a drink to calm down with. However en route we noticed there was one final place we really had to pay a visit to. 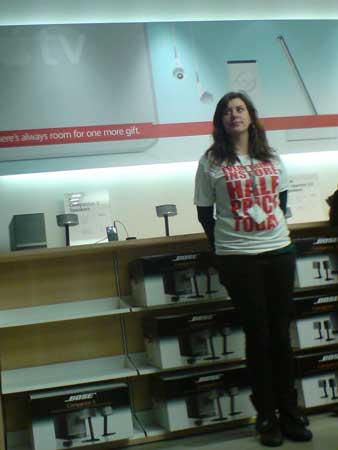 Agent Koshka at the Apple Store.

The Apple store was our final stop of the day, and proved to be one of the most amusing. Agents Koshka and Bananas managed to slip around by the front door and get into the new ipod window display, whilst other agents wandered around with a look of smugness that only apple can give you. The staff were generally amused, but unfortunately, as usual, the manager took a dislike to our shirts and ordered us to remove them or leave. Agent SarahTonin offered to remove hers immediately, however after discovering she was only wearing a bra underneath the manager asked her to kindly keep it on.

A fine day's hard work done we decided to head to the pub to BUY lots of beer, ooops. 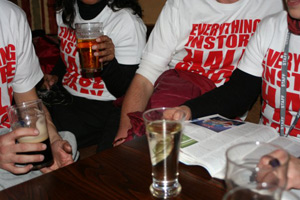 - Getting into the window of the apple store and people from the bus waving at us
- A very well dressed looking old geezer coming over to me in Louis Vuitton and saying smarmily, "You know it's sad you weren't around in the 60's and 70's, the real heyday of anarchism, but this is pretty good i like it". Then when I said "Can I ask you how you got from the heyday of anarchism to shopping in Gucci?" his depressing reply "I did what I had to do". Whilst his Russian trophy wife kept saying "Is it true, is everything really half price?"
- Being in the pub and forgetting we were all wearing matching t-shirts like a big cult.

Top day indeed, very much enjoyed getting amongst it :-)