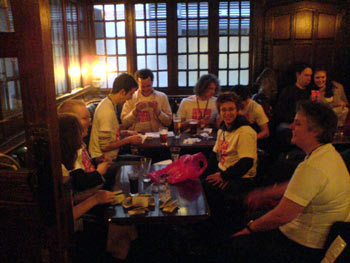 Buy Nothing Day seemed like a perfect occasion for a bit of consumer chaos, and so on a cold November afternoon a bundle of Hijackers met up in a central London pub, just off Oxford Street. Agent Nut Roast had made a bundle of leaflets explaining the philosophy behind Buy Nothing Day (examining our ever more consumer based society and looking for other ways of entertaining ourselves without it always being mediated by a brand, shop or purchase). The leaflets also had a host of games printed on them which you could play instore instead of shopping. 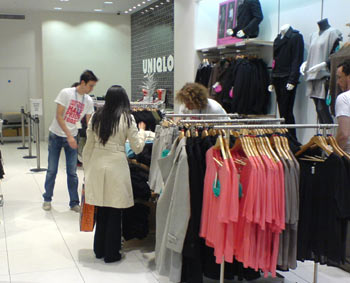 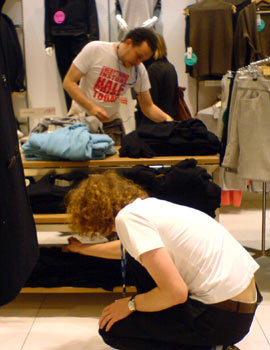 Our first main stop was clothing emporium uniqlo in the Plaza Shopping centre on Oxford Street. Quickly slipping into character we tided the shelves, folded jumpers and welcomed customers. The staff were seemingly oblivious to what was going on and we lasted for a good five minutes before we began to feel the heat. Customers who had been assisted by our helpful agents were approaching the check outs, with twice as many goods as normal. We had also slipped a load of leaflets into the pockets of trousers and coats. Once a commotion was heard at the tills we decided it was time to bail out and move on to our next target. 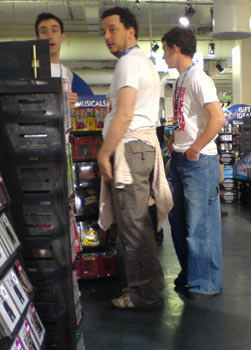 The HMV megastore on Oxford street was a much more fun experience. We had only been there for a couple of minutes before I was approached by staff and security. After explaining that I was just trying to help I was told: "are you taking the piss? You have to stop helping to tidy up! You are being illegal! You have to leave" Not being sure of the exact legality of tidying up I made my way to the exit, shortly to be followed by the rest of the gang. 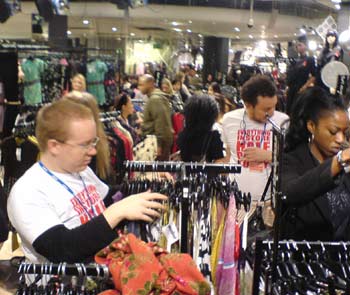 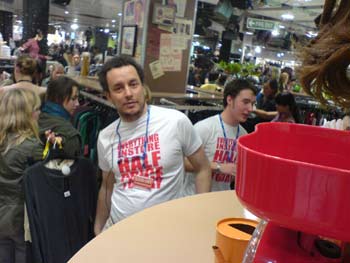 We decided we needed a much bigger store to get lost in and increase the lenght of time we managed to stay, so what better choice than TOPSHOP, which claims to be the largest fashion store in Europe! We were approached by staff pretty sharpish once again, however due to the size of the store inter-departmental chaos ensured we could outstay our welcome. A typical exchange here with agent Nut Roast: 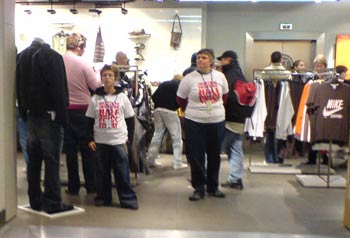 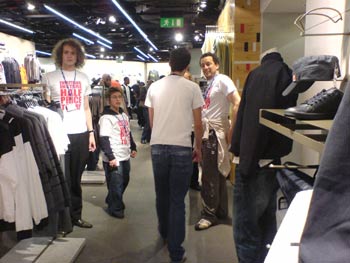 Agents Bannanas and friend, plus November, Spritely and Nutroast.

What Hijacker trip to Oxford Street would be complete without a visit to our old favourite nemesis Nike Town? Security have a special place in their hearts for us here after we have held a number of projects in their illustrious store. One involving several riot vans, and a bundle of the Metropolitan Police guarding the door, but that's another story. Realising that we weren't going to last too long, we made our way straight to the top of the store so that they had the longest way to throw us out from. I instantly picked up some trousers laying on the side and went searching for where to put them back, other agents greeted customers. Within a minute we had a security tail. Nutroast had given a leaflet to a customer, who had it snatched out of his hand by a security guard. Wilst I tried to take a photo I was cornered by another guard who tried desperately to get as close to my face as possible whilst talking to me.

Soon enough the fun was over and we were all escorted out of the store. On to our next target. 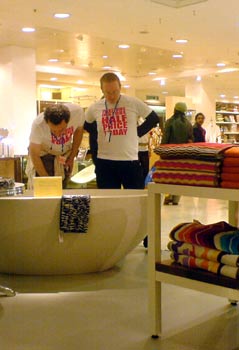 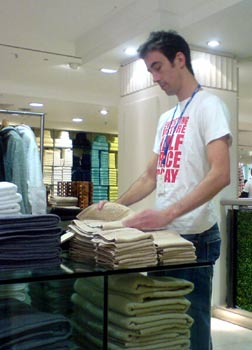 Designer living doesn't get more classy that Selfridges, a gleaming white temple to consumer living. By this time our numbers had been boosted by several more (lazy) agents, and so we split into teams and wandered around the store, looking for customers to help. 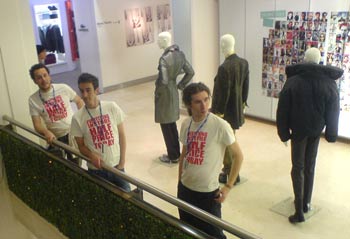 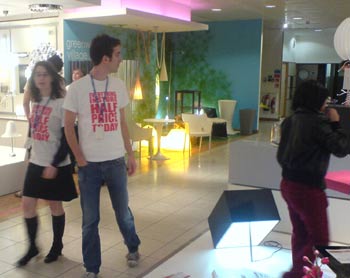 Unfortunately it wasn't long before we had a tail and a team of walkie talkied security were following us around the store. Unlike Nike however they were not looking for a fight, or even a scene, so we split up and continued our assistance. 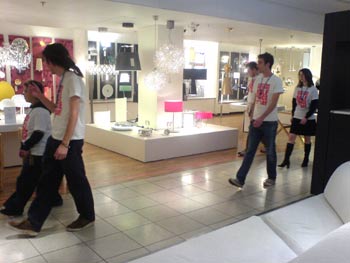 Before long however the gleaming floors and expensive goods got a little to much for our tender palletes and half our team decided to head back out onto the streets, whilst the others took care of the inside of the store.

Welcoming people on Oxford street was great fun, and we soon attracted a bundle of new friends. Our favourite being a Spanish lady from one of the perfume counters who came outside looking concerned. 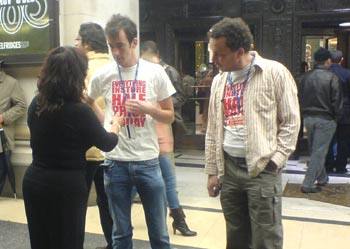 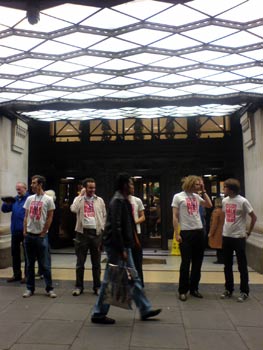 Spanish Lady - Excuse me, do you realise, people think your T-shirts are about Selfridges
Spritely Monkey - No! Really, how have they got confused
SL - They think as you are standing here, you work for us
SM - But we are just waiting for some friends who are inside, what a terrible mistake! 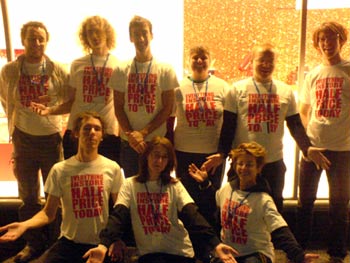 And so we decided to call it a day, another troublesome day's Hijacking came to an end, and we were all well and truly broken from all the walking around. However it was nice to see that the local papers picked up on our little game. This is from CITY:AM a free paper for the financial district in London: