An invite arrived from Hull Time Based Arts, for us to head up there to take part in their Root 2000 festival.

Perfect we thought, finally a chance for us to test out our Mobile recruitment center, and get some quality Hijackers on board. 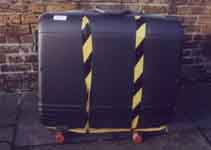 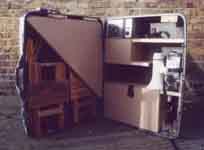 Four of us arrived, (Agents Robin, Helen, Saul and Lottie) after bunking first class all the way there (After all no train guard is ever going to have the cheek to check tickets when most of the train is squashed against the window). Our first port of call was 'The Lamp' a pub/club just near the station that had been set up as one of the venues for the festival. Pints were bought and we attempted to find out who was incharge, unfortunately to no avail. Never ones to be detered by a lack of authority we set up our HQ in a corner of the heaving pub.

Absolute chaos then ensued, drunk applicants were falling over in the quick change outfits, pints were being sunk like there was no tomorrow and Agents were being signed up left, right and center.

Closing time came and we were all booted out, back to the Sunny Bank Hotel it was. But what was this, it seemed The Space Hijackers and Molotov had been booked into the same room, with only four beds. A pillow fight for beds started between Saul, Lottie and Molotov, which got nasty. Eventually all was settled with the comandeering of another room and extra matresses.

The next day and we headed off to Root Hub at HTBA, upon arrival we walked upon Ricardo Dominguez in his EZLN balaclava. Telling stories of the Zapistas and keeping everyone transfixed.

The talks began and we sat in for a while, although it did have the feel of an 80's public art reunion, with us as the naughty kids at the back with Molotov. We slipped out to see what was going on about town.

Howard Matthews, is Genius! coming up with one of the funniest street performances I have seen yet. Howard walks into a phone box, lets off a smoke bomb, and then walks out of the smoke filled box transformed into a Monk. Other versions included a rugby player sprinting out of the box, and some kind of Davey Crockett character.

Later on that day came the artists walk about town to see all of the 'INTERVENTIONS', I swear I have never been so embarrased in all of my life. We tagged along as a posse of ageing activists and 70's performance artists did the rounds of the programmed 'Pranks'. It wasn't so much that the events were bad, although there were some, it was more the fact that it absolutely destroyed the point of any of the work. I get the feeling people might have guessed something was going to happen when 30 DV cameras and press are all trained on an empty phonebox.

That evening there was a party for the artists, which is where our dissolusionment set in. It felt like a school disco that your parents also attended. A series of Fluxus films were showing in a screening room and Molotov were at the decks. (All credit to them for putting some life in the affair, with their dubious music and one of their members standing up n the cinema and screaming "This is Shit" before walking out.) We set up our recruitment center and decided to reject most of the people who applied, this was shortly after my announcement on the mike that we hated everyone there and probably wouldn't accept any of them. Boy were grown up aren't we? Maybe all the vodka and red bull was beginning to have effect.

We left the venue to search out some other night life and maybe recruit some other bandits from around Hull. But to no avail, eventually we returned to Sunny Bank and met Molotov and a bunch of others in the room. More drinking was done and we all became friends.

The next day there was some character rolling around on the floor with paint and a bad suit on. Oh performance art, what a joy to sit through. Then came THE ABSOLUTELY BEST TALK I HAVE EVER BEEN TO IN MY LIFE! Ricardo "The Man" Dominguez saved the whole affair. I can't even begin to go into what he said but it included his work with EZLN, the Critical Art Ensemble, EToy and a whole host of other stuff. Ricardo Dominguez is KING.

We left back for London then, All on a high and aching to go and destroy the whole of the capitalist world.

On the whole Root was a very interesting and lively event. I guess it is always going to be impossible to place work that really exists outside of the whole ART way of doing things within an organised ART framework. We are all very glad that we went, and promise to keep intouch will all of the people we met there.