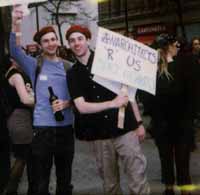 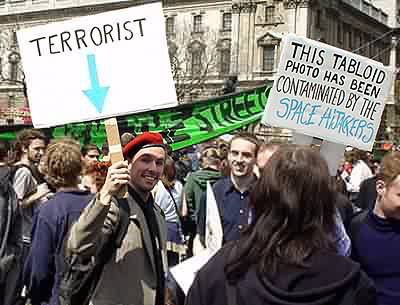 Ever aware of the fact that there are often more DV cameras and tabloids than protestors at such events, the Space Hijackers decided to become media whores for the day.

Sporting a number of banners we dived into the media frenzy that was M1. (Incidentally, I recently read that someone else is a bit bored of the whole letter-number format of protest names, J18 etc, Lets think of some much more stupid names that take up much more newspaper inches!)

Our efforts to gain tabloid fame were looking quite prosperous, untill the effects of the red wine and lager set in. (It happened to be my Birthday, I'm quite proud of the fact that the day I was born is also used as an international distress sigal). The Space Hijackers attempt at media stardom was put aside, as all of the agents present decided it would be much more fun, to have a laugh and a drink with our mates an make some noise. We had already identified ourselves as terrorists to the Old Bill via the subtle use of placards, so we nipped off to the offie by Trafalgar Square. More wine was aquired and we headed back to the demo. only to find that it was heading towards us!

This opportunity could not be missed, and so the Space Hijackers led several thousand people up past Downing St and to the Battle of Trafalgar! Chaos soon reigned, and a McDeath restaurant was destroyed, the Police moved in for the Kill and war broke out, as everyone had expected.

It was a lovely sunny day, all types of stuff was being thrown about, no cars could get onto the roads as they were covered in dancing and rioting people. I particularly Liked the line of Skateboarders who sat down opposite the police in the Strand and pretended not to notice their presence.

After a lot of badness, the Space Hijackers returned to the East end, in order to carry on our Festivities in the "Grave Maurice" in Whitechapel. The Burns brothers were rocking out the Pub rock favourites and we had lots of stories to tell our mates. We all crashed back at my house and woke up with very sore heads.