MAYDAY 2007 – Suited and Booted
We want to relaunch the Mayday protests with a new spirit and new tactics. 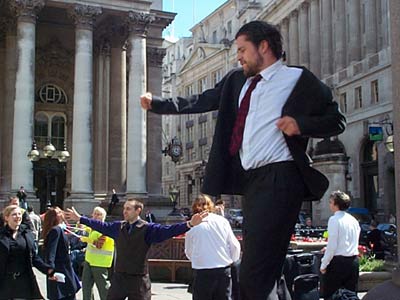 The press, police and government have been able to scare off, contain and criminalise, us and our tactics with increasing efficiency, since Mayday was switched from a simple A-B workers march. This has caused the protests on Mayday to gradually dwindle in numbers and vibrancy over the last few years, culminating in a return to state authorised marching last year.

We have decided to see if we can inject a bit of life into this dwindling day of protest and celebration, we don’t want to march from A-B.

We have a plan, it’s as raucous as our Circle Line Parties, its as well dressed as our Midnight Cricket Matches and it’s as down right cheeky as our Guerilla Benching. We would like you to join us, and kick Mayday back into the calendar with a bright colourful bang!

We are going to be hosting a party right in the heart of the Corporate Financial Centres of London. To pull it off we will need secret agent cunning, disguise, inventiveness, stealth equipment and more.

We can’t let the cat out of the bag just yet, however here are a few details. Firstly, in order to get past the police, you will need to get an outfit together, we are all going to be disguised as city workers. When we say disguised as city workers, we mean it. NOT DRESSED AS PROTESTORS WITH T-SHIRT, TRAINERS AND A SUIT, it’s time to pull your finger out and realise that your individuality isn’t challenged with a bit of dressing up.

We are planning all manner of cunning things, including a singalonga with Jarvis himself, because “Cunts are still running the world”. But we can’t plan everything, we are not your boss, and don’t want to be, so start planning your own actions and events, get your thinking caps on and lets relight the mayday torch.

More details are coming soon, but for now, spread the word, get excited and get an outfit sorted.

Space Hijackers … Over and Out.
http://www.spacehijackers.org