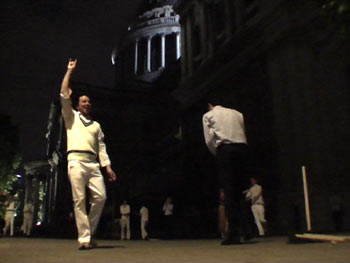 Friday 25th May 2007
Paternoster Square, The City Of London

The Anarchist Vs Capitalist Midnight Cricket matches are a chance for two opposing cultures to meet up, share a drink and speak to people they would never normally meet. It's a chance to encourage the suited capitalists to play in the streets of the city, streets which are usually brimming with straight laced seriousness. It's a chance for Capitalists to find out about us, and for us to dip into their obscure world.

The 4th Midnight Cricket test took place on a warm Friday night. Our regular pitch (a square opposite the Lloyds building in the city) was undergoing building work so in the week previously Hijacker agents had been cycling around the city looking for a new pitch. Eventually we settled upon Paternoster Square just next to St Pauls Cathedral. It had all the benefits of lots of bars, brimming with suited city workers, a perfect open square to play in and easy to reach. The only problem was that it was private land and we were not really welcome. However as they say, he who dares...

Hoping to uphold our unbeaten record, we gradually made our way to the square, dressed in our whites with bats under our arms looking forward to a good match. Several agents were on the Critical Mass ride in full cricket whites before heading into the city. Earlier on in the evening, more agents had by chance bumped into the ride and an impromptue cricket match was held on charing cross road whilst the mass held back traffic! 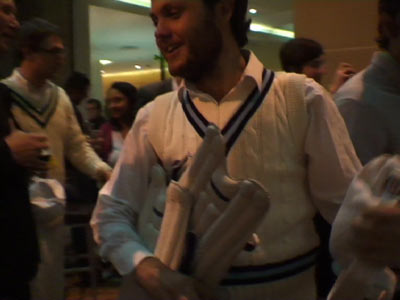 Drinking in City bars dressed in full cricket whites, as opposed to the obligatory pin stripes, makes you stick out like a sore thumb. This has it's benefits however as all we had to do was sit down with a drink and soon enough the curious city workers were asking us what we were up to. We turned up in the Corney & Barrow, and put our stuff down by a table, and soon realised what an alien world that of the capitalists is. Looking around the bar, there were men in expensive suits chuffing on fat cigars whilst girls giggled next to them choughing on smaller cigars, the champagne was flowing and money was being waved around. The most striking aspect of the place was however, how utterly depressed and bored most people looked. Perhaps this was due to their soul destroying chase for meaning in life via a hamster wheel of consumer goods and materialistic vacuous shows of wealth, alternatively it could have been the horrifically over priced drinks? 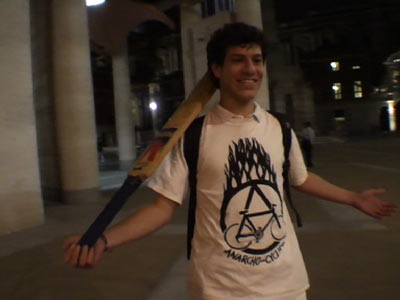 After finding a Capitalist captain for their team we moved around the corner to a different bar (where they actually sold beer in pints!) and continued our quest for an opposition. More hijackers turned up and soon we were in lively debate with the capitalists over what anarchism was all about, why capitalism wasn't good for the world and the rules of cricket. Midnight was fast approaching and we rounded up the two teams to take to the square and play. The capitalists won the toss and decided to bat first. 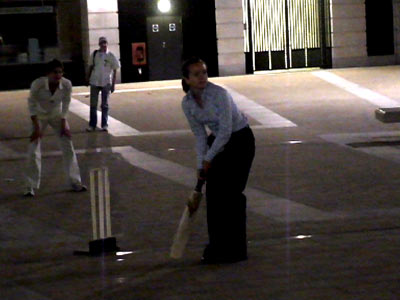 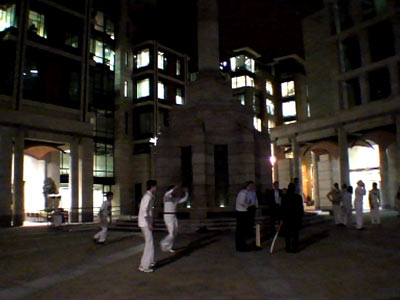 We had brought stumps mounted on hinges with springs so that we could play on the concrete, and due to the number of windows surrounding us we opted to start off with a tennis ball rather than real cricket ball. The Capitalists started well, slogging the ball all over the square and racking up a good number of runs. Drinks and bags were left by the plinth in the centre of the square and our fielders kept dashing off for 'refreshments' which didn't help our cause. 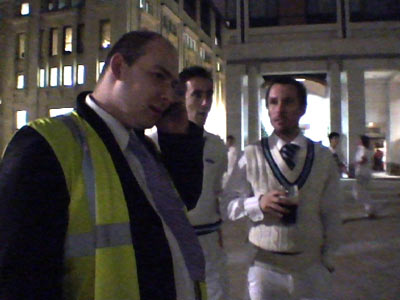 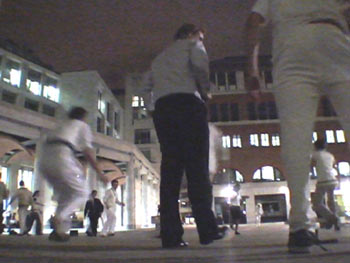 Unfortunately Paternoster's eager security team were soon onto us and attempted to stop play. In a cunning hijacker move we explained that the match had been authorised by Paternoster Square events team, and that we would call them up so that they could explain to the uninformed night shift security. A quick phone call to one of our fielders and the mobile was passed to the head of security. Whilst agent Undecided hid behind the plinth and kept the guards entertained, with tails of lost emails and bad management, play continued. 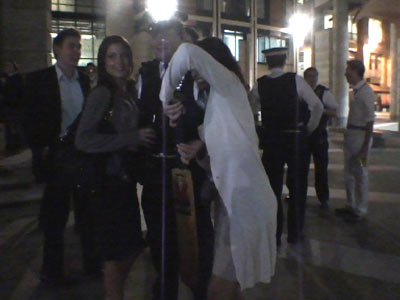 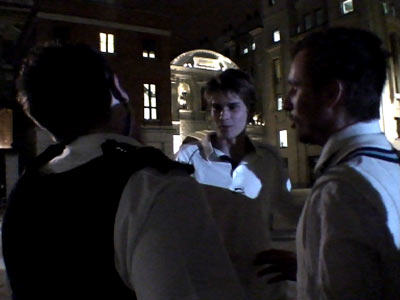 However it wasn't too long before they saw through out cunning plan and the City Of London Police were called to the crime scene. Flirtation from city workers and sweet talking from the Hijackers ensured they left with a smile and we simply moved 100 meters to the side to occupy the front of St Pauls cathedral. The game was back on. It didn't take us long to finish off the tail end of the Capitalist batsmen, so it was soon our turn to bat. 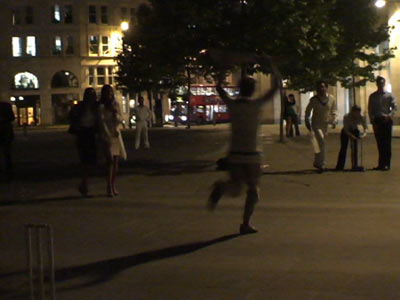 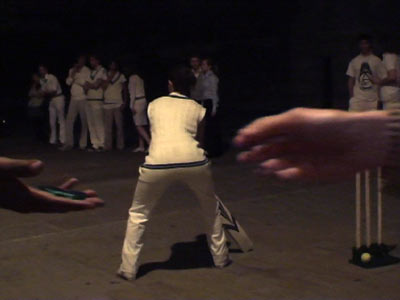 A stirling performance was put in by the hijacker team, with special notice going to Climbing Bandit for his bowling skills and Pelf, Gelatin Agent and PatelAneeta for their handywork with the willow. It soon became clear that there was only one team in the running, and just before the police turned up again with re-inforcements, the Hijackers were proclaimed victorious! 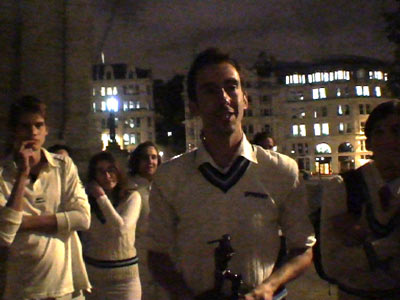 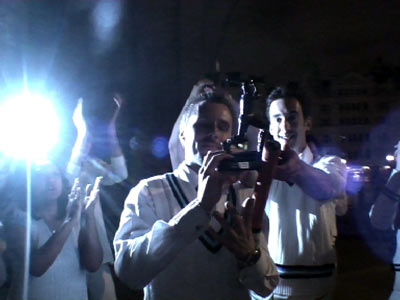 Agent Spritely Monkey had brought along a beautiful engraved trophy and after a quick speech about the virtues of anarchism over the evils of capitalism Bristly Pioneer held our trophy aloft whilst the victorious Space Hijackers cheered on their team. 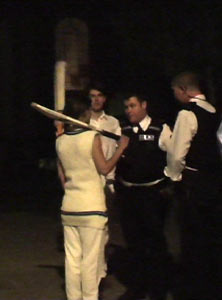 Unfortunately, the City Police were less excited than us about the prize giving, and the anarchist victory, and we were asked to move on again. We bid farewell to our Capitalist opponents and set off to the millenium bridge for more cricket, drinking, dancing and trouble. Eventually the bails were removed from the stumps as daylight was coming and we headed off back to East London to rest our weary heads.

Playing cricket on Charing cross ROAD in the road infront of the Critical Mass cyclists.
Watching the police who moved us on from Paternoster square have their photos taken with the lady suits and then hearing one of them pronounce afterwards. "I guess it's just one of the perks of the job"
Playing with a real cricket ball which became a bit dangerous towards the end.
Stopping north side of the millenium bridge for a third match against each other and the public at large. This was excellent because we had people from every walk of life playing with us. It was truely amazing, we even had a profesional cricketeer batting who hit the ball all over the place.

It was my first cricket ever and so the very best. Don't know how the others were like, but this one was just amazing, specially, as The Jewk says, when we played at the millenium bridge and everyone passing by would stop and join us. Was also cool to see that you can actually play cricket and skate at the same time.

Yeah, that was one of the best games of cricket i've ever played, i think the funniest moment was with the cricket ball, when "someone" went to bowl then just threw it at one of the windows, also cycling back at 3:30 was quite good, u see some strange sights after dark south of the river.

Bumping into Critical Mass purely by chance and proceeding to indulge in an impromptu game in the Charing Cross Road.
Dancing next to a busker at the Tube as we waited for Undecided to stop being undecided
Hearing Bristly's farewell to the city police! If anyone can recall an exact quote I'd be most grateful!
The local security being very very confused especially by our helpful phone call.
The cricket trophy losing a leg in the best possible way (via a cricket ball)

The city boys enthusiasm when i suggested it should be 20 runs to anyone who broke a window.
Moving the stumps around the security guard who was purposefully standing between them and carrying on while Bristly distracted him by pretending to call his boss.
Playing in the shadow if St Pauls (or where the shadow would've been if it had been daylight)
The police suggesting that "gobiness" was a crime.
Playing with some guys in (i think) full traditional Muslim dress. It was all white, therefore they were clearly well prepared for cricket.
The security guards at our third pitch watching our match from their windows, clearly highly amused.
Sheltering behind big metal benches to watch when the real cricket ball came out.
Trying to get on the back of a bike wearing a skirt and carrying two bags, a tripod and a cricket bat and the whole thing just toppling straight over sideways.
Walking into a pub as it got light. 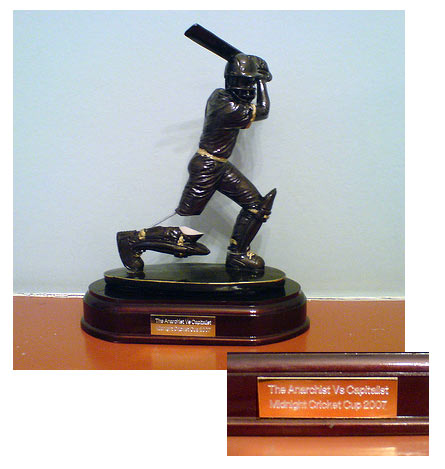