Meeting up on a freezing cold November afternoon in London, our band of secret agents were to be put to the test,
we were to play the Nexus Chainstore Massacre!

Held on Buy Nothing Day the Nexus Chainstore Massacre is a game of skill, social engineering, speed, and outright cheek! Contestants have half an hour to storm around Oxford Street collecting as many corporate logos as possible. The larger, cheekier and harder to aquire the better!

Agents Jewk and Shaz had worked long and hard on preparing for the challenge, making banners, flyers and a website for the massacre. We met in Cavendish Square gardens just off Oxford Street and set up our start and finish line. Unfortunately our strip of astoturf had no line on it, and being Buy Nothing Day we couldn't buy some paint. A quick trip to the sugar counter at Pret A Manger and we had a line the olympic comittee woud have been proud of. 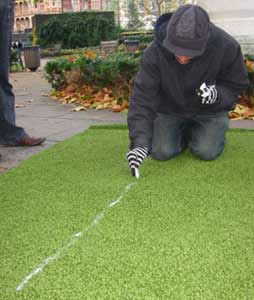 El Miguel was nominated as official referee and stop watch for the game, our agents lined up and El Miguel pulled a party popper as a starting gun. Unfortunately it backfired, but by then it was too late, the contestants were halfway across the park and there was no turning back now.

Our agents picked a variety of techniques, some opting for stealth hoarding of instore information leaflets and giveaways, some going for social engineering skills and persuading staff into handing over the goods, others going for bare faced cheek and 'aquiring' shop displays by devious means.

With the stopwatch clicking our budding corporate hoarders dashed back across the line with their booty.

A prize will be awarded to the winner at this years Space Hijackers Christmas Meal.

An impressive hoard was produced, and we all felt suitably dirty after handling so many corporate advertisers wet dreams. It was time for a toast, not least to warm us up a little from the bitter cold. 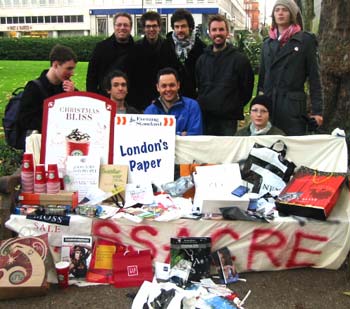