Our group has covered many areas with our projects over the years, from the SOCPA zone, to arms fairs, from over zealous policing to consumer culture, however the one thing that binds all of our projects together is an interest in our city and how it's built up. We come at our actions from a perspective of active users of our city. "Our City" is ours as we live in it, often to the mind of a Space Hijacker the actual ownership of parts of the city is irrelevant, Nike may own Niketown, however if it's in "our city" then we see it as fair game for Space Hijacking and the chaos that may ensue. As active users of our city, we demand a voice in how it is designed and who for, when official channels are redundant talking shops then we take to the streets to show our voice, we encourage everyone else to too.

There has been an idea roaming around on our boards to do an action about the way that councils are constantly selling off land to private developers in the name of re-generation. East London especially has been undergoing an "urban renaissance" since the building of the docklands and broadgate centre, however all this seems to be doing is moving out the poor and replacing the charm of the east end with bland monotonous monoculture, safe for property developers and the rich to move in.

"For the public good" seems to have been dropped from planning law and replaced by "For the benefit of the economy" and the areas are re-born as shopping centres and private roads. Public rights of way no longer exist and draconian rules come in to make the area "clean and safe" for everyone, everyone except for the people who called these areas home for years.

A lot of this is covered in Anna Minton's excellent book Ground Control - Fear and Happiness in the twenty-first-century city.

As a response to this, we decided to make up our own list of rules for private space, and go and help keep the peace. To make the often subtle rule changes overt, and to show how public space is being eroded, and undesirables pushed out of the city.

The site we chose for our first outing was the "saved" (read 2/3 demolished , a giant office block built, small businesses booted out and big moved in) Spitalfields Market. Previously a bustling east end market housing everything from a skateboard park to second hand clothes shops and jazz bars, it's now home to Wagamama, Giraffe, Evans Cycles and a host of other bland corporate large Chain-stores. Private security forces patrol the area, kicking off the homeless, kicking out smokers and chasing off skateboarders. Ensuring that the area is clean and safe for the workers of the city and uninviting and imposing for the people of the East End. 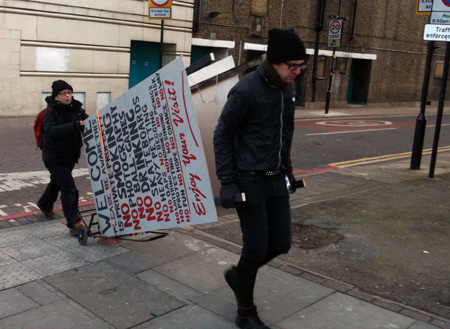 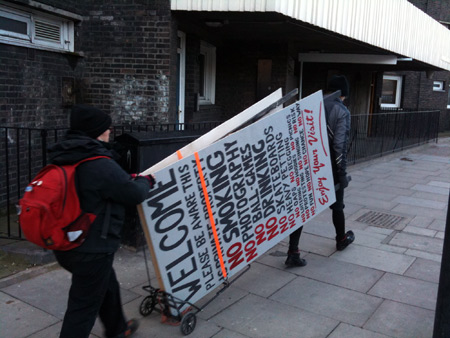 So with our giant sign strapped to a trolley we wheeled it all the way from Hijacker HQ to Spitalfields. Dressed in our most nondescript black clothing we erected the monolith to order and set about helping the security keep the area safe. 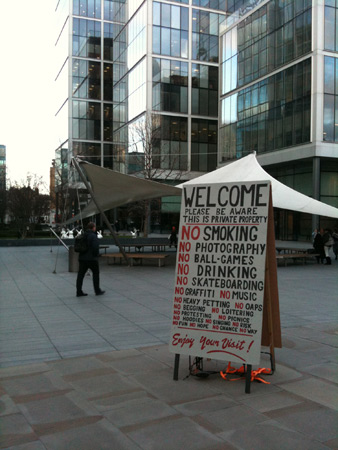 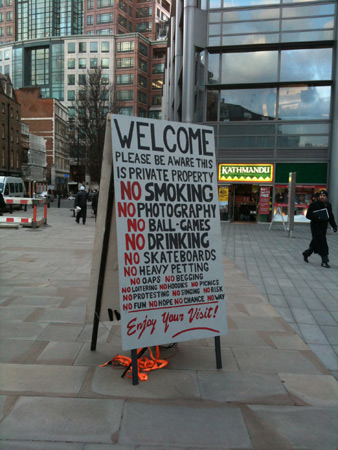 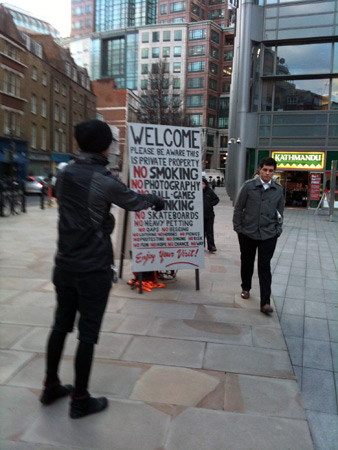 "Hey you, stop smoking"
"You slow down, No Running"
"No Cycling"
"No mobile phones please sir"
"Oi, you two, further apart please, No Petting"
"Oi Son, take that hood down"
"You, keep moving, you're loitering"

It seemed everyone was doing something wrong. 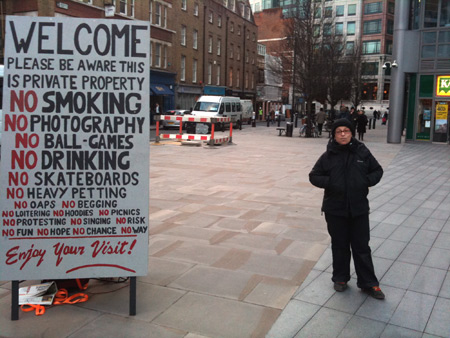 Surprisingly it took about an hour or so before we were first approached by someone claiming to be security. This was probably because we'd cunningly set up our sign, just on the border of their land, and technically they didn't have any jurisdiction over us.

at this point the other Hijackers are still circling our sign telling off the public. More security have now arrived

SECURITY - "Ok, move along now, pack this up, what are you protesting against?"
HIJACKERS - "Excuse me sir, please read the sign, there is NO PROTESTING clearly written on it, please don't protest here"

Bemused and not really sure what to do, the security fall back to look on at us. The public are still being roundly told off by us, most of whom giggling at the sign and our official stance. Some old east end ladies start screaming obscenities at us

"You can't fucking tell me to stop smoking here, fuck you, is swearing banned too? fuck off"
We ensure that teenage boys in hoods walk the correct side of the public/private land division, and tell of a couple who are trying to photograph our sign.
"Excuse me, NO PHOTOGRAPHY, are you a terrorist? Stop that right now!"

Several people come up to us asking us if we are aware of the I'm a photographer not a terrorist campaign going on. Although they are good friends of ours, we inform the public "NO QUESTIONS, please move along NO LOITERING"

The security are still loitering around despite many attempts by us to move them on. However by this point it's getting pretty bloomin' cold so we decided to de-camp to the ten bells pub.

Just as we're strapping our sign back onto our trolley, a police squad car pulls up. "what are you up to?" nothing we reply, we're leaving. To the dismay of the now rather many collected security, cleaners and onlookers, the Police leave us to it, and we head off thinking about which other private spaces would be perfect for this ridicule and how we can make more signs. 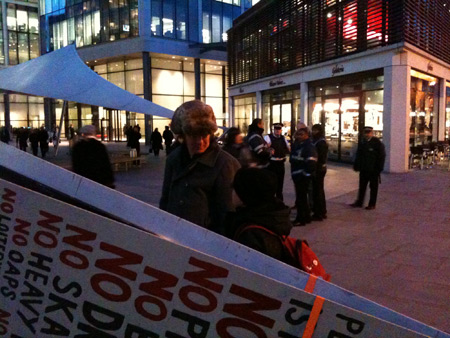 foot note,
It seems since getting a thrashing in the papers and then bottling a court case against us, the Police have gotten their knickers in a twist over the Hijackers. Upon leaving the pub, another squad car pulled next to us, calling us by name and asking about the Space Hijackers and our tank, they had obviously been sent down to let us know that "we're keeping an eye on you". Then later at a talk we went to, another group of police came in and asked the organisers if they knew we were there and how the Space Hijackers got their tickets (for the record, we bought them like everyone else, obviously). A lesser group might assume they are beginning some sort of campaign of harassment against us over our perfectly legal actions, we of course like to think of them as an ever growing fan club of our work. Unfortunately our sticker book isn't out yet, however we'll be sure to inform the met as soon as they can start collecting our top trumps cards.