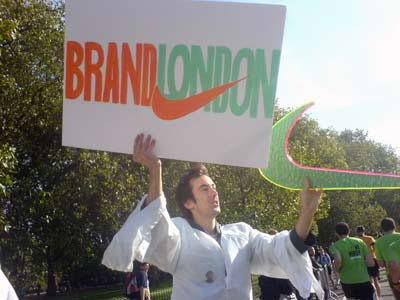 Every year, Nike organises a huge self promotional publicity stunt, dressed up as a fun run. Gaining ambition each year, the brand is attempting to convert London's runners into Nike runners, with an event aiming to overshadow even the marathon. If you ever happen to stumble across it, it is a wholly terrifying experience, a cross between a religious cult charging en-mass and some sort of military show of strength. Thousands of people, dressed identically thundering past, each branded, numbered, and this year individually chipped.

We decided this year to embrace the cult like spectacle and push things a little further. 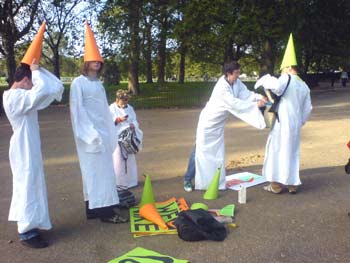 Donning religious robes, and hats in the Nike run colours we met up at speakers corner in Hyde Park. Speakers corner has since time began been a meeting place for religious and political debate, with it's own brand of religious nut jobs who specialise in incoherent ranting, it seemed a perfect place for us to meet. 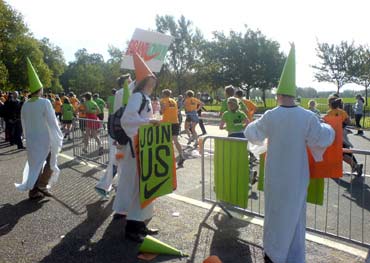 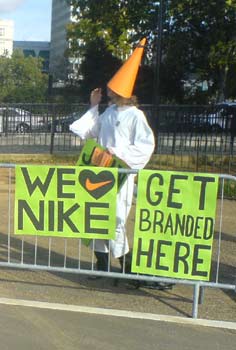 Wandering down to the run, which had taken over Hyde park for the day, it was a scary experience, and it took us a little while to get over the initial shock of hundreds of people charging past dressed identically. However we were here to do a job, and so we knuckled down to business.

"REMEMBER BRANDING IS NOT JUST FOR CATTLE" 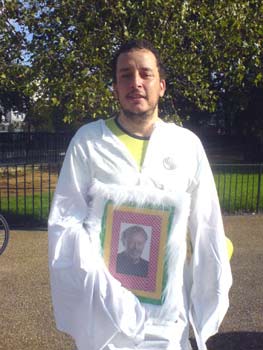 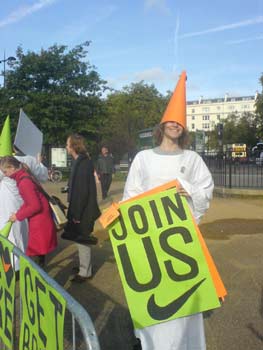 As we began to get accustomed to the spectacle of the run, our confidence grew, and we soon found the recruitment for our cult was coming along swimmingly. Agent Bananas took control of the branding iron which we had brought along to give people extra Nike Swooshes if we thought they were not committed enough. 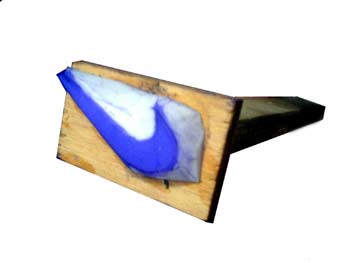 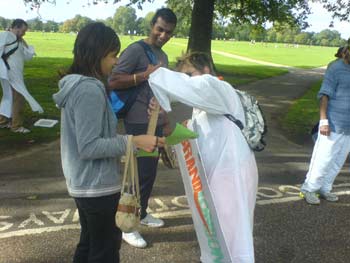 Before long several runners and dozens of passers by were sporting extra logos inked onto their skin. Our cult by now had begun to draw some attention, and a heated debate was started over Nike and their sweatshop abusing business practices.

"REMEMBER IT'S NOT THE WINNING,
IT'S THE BRANDING THAT COUNTS!"

Whilst this was going on agent November was busy trying to sell a glass jar of Paula Radcliffe's urine which he had brought along. Paula, six months pregnant, was running the race that day, in an almost unbelievable show of brand loyalty. She had also recently stopped on the London marathon, 300m from Space Hijackers HQ to have a wee on the floor infront of the national press. Classy.

After deciding to pick a new spot to chant from, we stumbled across a stage, with a concerned looking band upon it, who had been hired by Nike to lift the spirits of the runners. The band looked less than impressed at the gig they had been given, and it wasn't long before we persuaded them to sport one of our signs on the front of their stage. 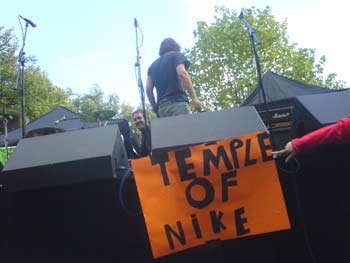 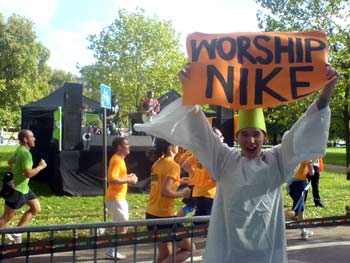 Interestingly most of the stewards for the run dressed in Nike clothing, seemed to be wearing other brands of shoes, we quickly reprimanded them, and explained that their chances of promotion were probably pretty slim. 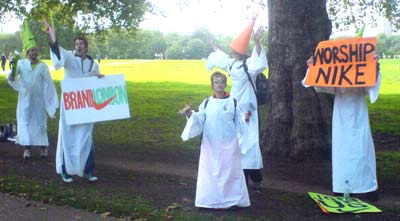 "IT'S GOOD YOU'RE ALL RUNNING,
BUT LETS REMEMBER WHY WE ARE REALLY HERE"

By this point, we had been cheered at, sworn at, prayed to and had holy water thrown over us (I assume that's what it was). The race was winding up and so we headed to the 'Athletes Village' set up in the park by Nike. This consisted of lots of toilets, some food stalls and a giant inflatable Nike & Apple store. All the things you would need to survive in a world of Nike. 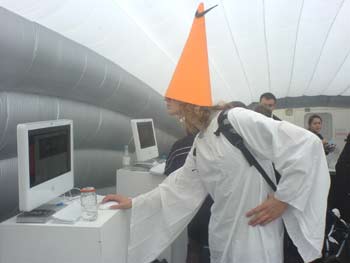 No sooner had we set foot inside the inflatable store than we had a security escort. Who immediately asked if we worked for Adidas! The cheek of it. 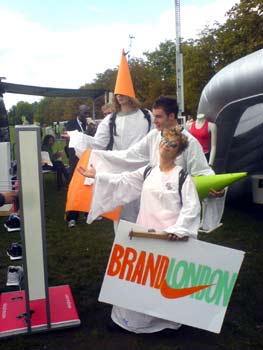 The swoosh and the apple seem to have found each other perfect bed partners, and a hybrid Nike Apple ipod running device thingy was being promoted. By this point the reality of the absurdity of the brands began to settle in. People had just paid loads of money to take part in a marketing stunt, then paraded around dressed in logos, whilst being chipped and having their details taken. Tired and delirious they were then being given the hard sell, and asked to buy into the brand even more.

We realised our cult, was nothing compared to the multi-million pound propaganda machine pumped out by Nike, and they were doing quite well producing a religion of their own. As we left the park, a final race was starting, a sea of orange and green racers were filing through to the start, ready to charge around the park and show their devotion to the brand.

Armed with a collection of white robes, pointy hats, posters of persuasion, order of service leaflets, a swoosh cattle brand on a stick and a jar of Paula Radcliffe’s sweat in a jar. We met at Speakers corner to share our thoughts about the cult-like branding operation of the Nike Run London, a pilgrimage to consumerism and
unethical treatment of their own factory workers. We acted as pro branding, super Nike loving, roaming preachers.

We spoke of the glory of the brand, the joy of reaching Nike nirvana and we also shunned and denounced the evils of any sportswear other than that of the one true brand “Nike”.

I can only describe the outfits worn by the two opposing camps of competitors as prison chic. In fetching orange and green to divide the competitors into north and south London, then with a rather fearsome script each competitor had their individual identifying number emblazoned on each side. This added to the rather bizarre mad cult rampage feel, what really got to me was the way that instead of looking like people on a jolly and friendly run, they were made to look as if they were running to honour the brand that has been so kind to them.