Run this way to escape

A Space Hijackers secret agent pulls up on a bicycle, takes his bag off and rests it on the concrete directions plinth. From his bag he pulls out a file containing a series of white cut out letters.

After seeming to fuble with his bike chain for a couple of mins, the Agent quickly hops back on his bike and heads back east to HQ, his work is done 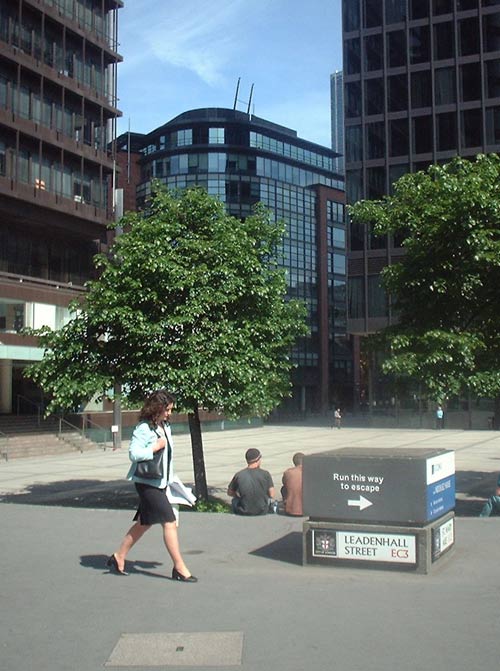 It has always been a mystery to us why the people who work in the city don't run out screaming, or at least spontaneously combust. The only plausible explaination that came to us was that they had been trapped in there and had no idea how to get out.

Over powered by the towering glass and concrete buildings those poor workers were obviously the victims of some cunning plan by a top secret group of executives, who sit on the top floors looking down on the brainwashed zomby suits walking around below them. Rubbing their hands and laughing at how well their evil plan has worked the executives had not planned for our courageous agents.

So we slipped into the heart of EC3 under the cover of darkness and secretly put up a sign directing the trapped lab rats out of the maze. Hip Hip Hooray!

We can confidently now predict a mass evacuation of the city of London, causing a crash of the stock exchange, which should have a knock on effect, eventually crippling the beast that is Global Capitalism. Today we saved the world! 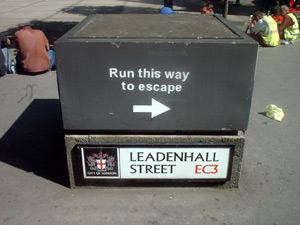