How do you feel about dressing up as Santa meeting up with dozens of other idiots who are dressed up in the same way, having a load to drink and seeing what we can get away with whilst on a romp through the west end.

Well we weren't going to say no now were we? 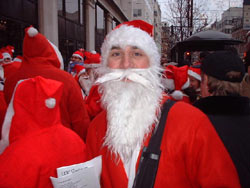 I met up with Ricky Santa, just off from Oxford St, we were running a little late and so had to sprint along to get to the santa rende-vous. Early on we began to learn the true power of santa, noticing that Santa can stop traffic on command.

We got around the corner to be confronted with the bizarre sight of fourty or so santas hanging out on the corner of Harley St (home of many an exclusive psychologist, which was telling we thought). There were a whole range of santas out on show, so as you can imagine there was quite a bit of santa fashion tips being passed around. Comparisons on boots, belts buckles and belly size were rife.

We were handed a song sheet brimming with christmas carols full of football style drinking lyrics and one of the Santas explained a rough route and a couple of beer stops. However first stop was to be Selfridges in order to get some nice rosy red cheeks from the lovely makeup ladies. After a few struggler santas turned up we all set off on the short walk to Selfridges.

Selfridges was in its saturday afternoon rush when the santas struck. We immediately had a security guard onto us who approached a santa at random asking what was going on. He didn't look impressed so in a move straight out of the Thomas Crown Affair, the santas split up. The single security guard had no chance of rounding up 50 santas strolling around the store, and another part of our mass santa power was discovered. We all made our way to the make-up section where the lovely ladies at YSL gave us a little rouge. Unfortunately within minutes our security escort had found his mates, and a whole security posse was upon us, demading that we left. Time for a singsong quite obviously. So infront of all of the christmas shoppers santa was thrown out of selfridges whilst singing drinking songs. Beautiful.

A short walk down Oxford St and we happened upon another santa, this was a Carribean busking santa. So there we were blocking a whole side of the street with a mass santa dance. However this made us all very thirsty and in need of a Santa lager top up, so we cut off the christmas shopping mecca and poped in the first pub we came across. A quiet little tavern with only around three to four people in it. That was of course untill the monster that was santacon happened upon it. Pints all round then. 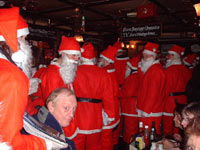 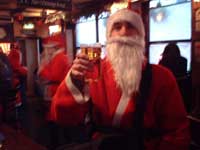 Time enough to knock one back and it was outside for a quick rendition of a boozy version of the 12 days of christmas. We headded back down to Oxford st and bumped into another busking santa outside tesco, so dancing around like a bunch of drunken lunatics it was again. And hold on doesn't tesco sell booze, quick inside for some take out.

We took a right at Oxford Circus and headed down Regent St. Lo and behold we came across Santa Mecca, or Hamleys as its better known. A mass santa prayer was done to the cathedral of shopping, with Hare Krsna (Harry Potter) chanting to make everyone happy. Unfortunatley some of the other santa's weren't quite as keen as the space hijacker santas for a mass santa wander around the cathedral. Well there's always next year, eh.

We all headed on down to Picadilly Circus, where by some magical santa occurence a samba band had turned up to greet us, along with several journalists. There was obviously a very organised santa at the centre of this binge. But by this time we all thought balls to it and joined in a merry jig for the cameras and multitudes of tourists.

All that jumping around with a belly full of lager makes santa need a pee, so the space hijacker santas nipped down to the underground to use the public loo's. This caused much hilarity from the Trevors and Garys hanging out in their reebok classics. Santa it seems does not need the loo. 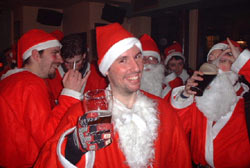 Those beards are no good when it comes to pint drinking.

Ahh, that felt better, now there's more space for a little more lager. Onto our next Public house, and another santa filled establishment. Another couple of rounds and the santa's bellys were beginning to look nice and round. Just perfect for people to cuddle up to. Time was by this point knocking on, so one of our santa posse had to head off, however Ricky santa was in for the long haul drinking with the santacon till the cows came home.