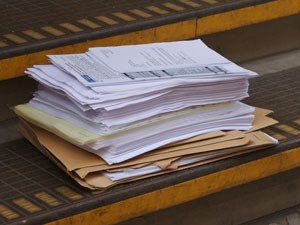 Application forms for the Police to process.

The Space Hijackers formed one of the ten teams for the event, and met up one evening, to process our paperwork and apply for our individual protests. The plan for the day was to have everyone meet for their first and last protests of the day at Parliament Square, then dissapear off in various directions before meeting back up again. Being a group of friends, our protests often 'just happened' to bump into each other during the day. The forms were handed in two weeks in advance and we all waited eagerly for our acceptance letters from the police, which arrived with only a day to spare (that must have been fun work!

As you can imagine, given the warped brains of the people who make up the Space Hijackers, the protests we applied for permission for, were not your usual run of the mill complaints. With secret agent cunning, we had also realised that rather than bringing 20 placards along to protest with, white boards and markers were a much more sensible option. 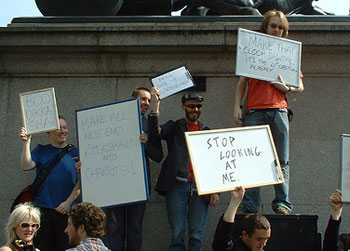 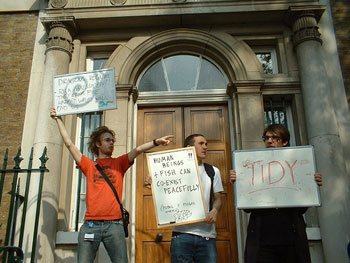 Our protests ranged from the absurd to the insane, calling for Big Ben's clock face to be turned digital, Parliament Square to be made into a circle, the Thames to be filled with Tizer, and Humans and Fish to co-exist peacefully. Obviously the point of the day was to highlight the insane nature of protest law in the UK, rather than attempting to make serious political points to the passers by.

However speaking of passers by, many had heard of the SOCPA laws and were in full support of our efforts to ridicule the laws.

The day itself was glorious, and our eager protestors wore out the soles on their shoes walking around the zone to the locations of all their different protests (obviously stopping off for a pint or two en route). Eventually we made our way back to Parliament Square for the finale protest, at 5:30pm.

The day was very good fun, with little police harassment. Eventually when the final count came in it turned out that 2486 protests had been applied for and acted upon in the day. Hopefully if this trend continues, the police will get annoyed enough to demand the government change the rules on the zone. With enough public pressure, perhaps even the government will repeal this obscure, oppressive and paranoid law.

Many thanks to Agent Invisible Parsnip for the photo's.