The day started off with a "Misguided Architectural Tour" taking us around the various public and private pretending to be public spaces. Here we looked at the variety of new developments springing up and questioned the benefits alongside the environmental and social impact of the projects.

Next was The Space Hijackers "A-Z of retail trickery tour". Here one of our agents led a tour of the shops pointing out all of the devious tricks shop designers will use in order to get you to spend more. Starting off in Sainsburys we looked at the shop layout, tiles on the floor, canned smells being pumped out and much more. Next was Benneton, who use the old trick of providing escalators to go upstairs into the shop, but none to come back down on.Wandering into the Bullring centre (Birminghams brand new monsterous shopping centre) we began to look at irrational pricing and 'transition zones'. Unfortunately this part of the tour was brought to a rather abrupt halt when Bullring security decided to escort our agents and the crowd who had gathered to hear, out of the centre! After the usual bit of security guard banter, we headed off down the high street visiting mother care and their interesting air conditioning, being thrown out of GAP and generally being followed around be CCTV and security for the rest of the tour.

Chris Graham was next on the bill, doing a performance for a strictly limited audience, entitled 99p profit. This involved him visiting an instore toilet and fishing a pound coin from his poo (which he had eaten previously) then washing it up and taking it off to spend! http://www.cgraham.net

My Dads Strip Club next enticed us all to play Urban Decoy, a game of stealth where we were split into two teams. One was sent of to meet a contact in Waterstones cafe, here they were given a mission to complete and get back to the base without the other team catching them. The mission involved a new makeup range called Urban Decay on sale in Boots. Agents were shown examples of the makeup which had colour names such as "army" "shag" or "nuclear waste" we were then sent into Boots to camouflage our faces using the instore testers. Once fully made up in combat style face paint we ran through the high street bacl to the base. Unfortunately all but one of our team was caught, the rest had shopping bags placed over our heads and were ritually humiliated whilst being tagged up with clothes tags! http://www.mydadsstripclub.com/more.htm 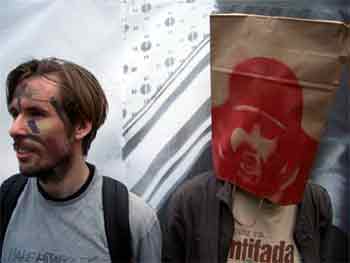 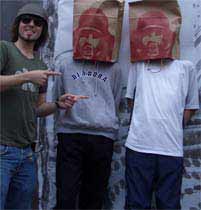 Following on from this the Vacuum Cleaner took us on a tour of Brazil (Selfridges have a new Brazilian theme) taking off from Birmingham International we landed in Rio (Selfridges 3rd floor). James our ever handy tour guide then gave us a guide to Brazilian culture using the handy Selfridges displays. Curiously though the displays seemed to tell a very different story of Brazil than I had learnt about elsewhere! We travelled to Sao Paolo (the second floor) and James explained that the talk of slums was all made up, infact as we could see everyone in Brazil wears expensive designer clothes!

Unfortunately the authorities (Selfridges security) were soon onto us to check our Visas, James tried to converse with them through a Portugese translator but they didn't seem to understand what he was saying. The next thing we knew the Brazilian authorities jumped on a tourist for having a video camera out and an almighty scuffle took place by the markets (shoe department). The tour eventually continued to the beach where we learnt about Brazilian food, however here we met the Brazilian Police, who look a lot like the English force, and were escorted back to Heathrow! http://www.producthistory.com

Finally to finish off the day we were taken on a climbing tour of Brum by the lovely people from irational.org. Scrambling up public sculptures, along walls, over phone boxes and on scaffolding. Agents Malinky & Arthur got wet trying to climb the Floozy in the Jaccuzi, and before too long we had all began to tire. http://www.irational.org

We headed back to A2:RT's warehouse space for a spot of grub and a beer or two. Here they had organised an evening of talks and film screenings. Unfortunately in order to catch our last train we had to make a hasty exit back to London just after our talk, so could not stay for the night. Cheers to A2:RT for all the hard work they put in, and to all the other groups who made this our favourite bank holiday shopping trip ever!