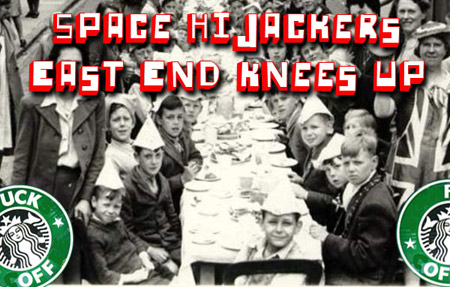 Ever since we saw the ‘Starbucks Coming Soon’ signs up in the windows of a building near our HQ we were racking our brains to come up with a suitable response.

Starbucks stand for pretty much everything the Space Hijackers are against. They actively try to put small independent competition out of business, they destroy the character of areas, treat their staff badly and their coffee growers even worse. Not only that they had the cheek to remove the nipples of their mermaid logo, in case it caused offence! 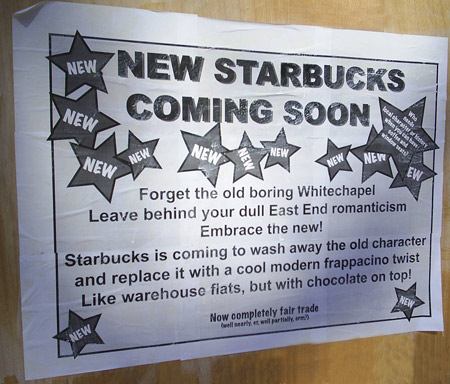 Whitechapel is an area of great diversity and character, it has bundles of local independent café’s and an amazing mix of people. Ever since the Huguenot weavers arrived in the 1800’s the east end has been the site of culture clashes and mixes, following on from them Irish, Jewish and Bengali cultures have also added to the mix. The arrival of Starbucks, rather than benefiting this jumble of cultures, is a sign of an impending blanding of them all. We are worried that other multinationals will follow suit, and before we know it the years of history and culture will be lost behind a sea of soulless perspex shop facades illuminating brands which are the same the world over.

An invite was sent out the week before, and we flyered all of the local café’s and bars. We had lots of support from local businesses with them advertising the tea party in their windows and inviting their customers and friends. 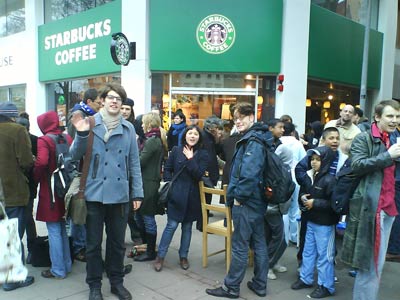 The day itself was absolutely freezing, and fifteen minutes before several of us were wondering if it would be a wash out. However we wrapped up warm, folded up my dining room table and headed around the corner to the new Starbucks. We walked up to the front doors of the store and set up our stall right next to them. Within seconds of setting up the table and pulling out our thermos flasks of boiled water people were approaching us. Homemade cakes and flapjacks appeared from nowhere, and we were ready to start. 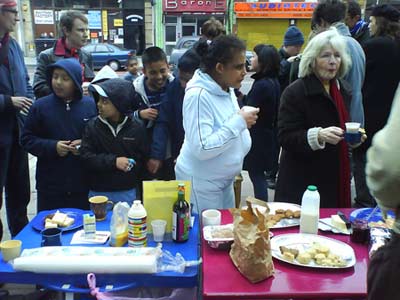 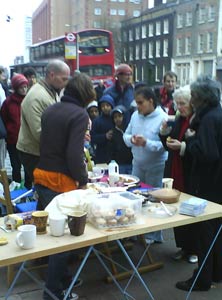 We had made a map of independent local alternatives to Starbucks which we displayed on our, now bustling table. Before long people were stopping in the streets to come and try our cakes, listen to our arguments and have a warming cup of tea. Starbucks was looking decidedly empty for their big opening weekend, just as we were having to add extra tables to our stall to fit on the cakes! 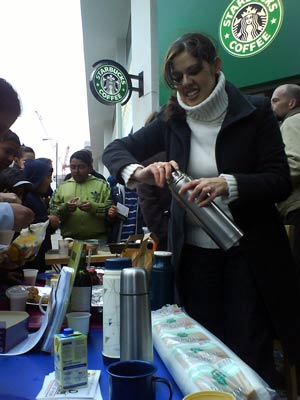 Obviously our invites had had the desired effect, and amongst other press, BBC London, Urban 75 and a couple of documentary makers were all asking for details about what was going on. Soon after our band arrived, with a portable drum kit and two trumpet players. 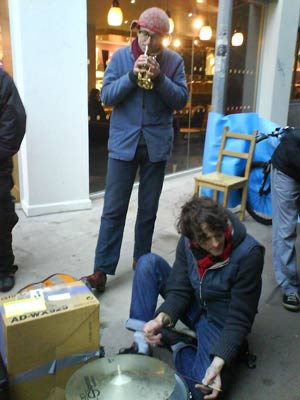 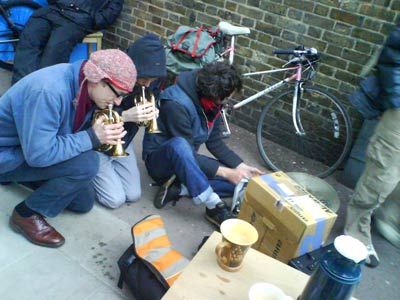 We braved the fierce winds and freezing cold for several hours, before finally calling it a day at about 5pm. We had given out over 150 cups of tea, served countless cakes, and spoken to dozens and dozens of our neighbours.

Starbucks is still there, and I’m sure it will be for a while yet, however as soon as the weather improves we intend to head back.